Steven Rattner, who served as counselor to the treasury secretary and lead auto adviser in the Obama administration has something to say about Mitt Romney and Bain.

I’m all in favor of piling on Mitt Romney for any number of reasons: his come-lately embrace of hard right conservatism, his periodic malapropisms (“I like being able to fire people”) and above all, the nonchalance with which he displays a dazzling shortage of principles by incessantly flip-flopping on issues, sometimes the same day. 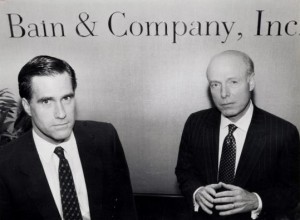 But these latest salvos being fired at his service as the founder and head of Bain Capital go too far. Having spent nearly three decades on Wall Street, when it comes to Bain Capital, I feel equipped — some might say too equipped — to parse fact from fiction. (Full disclosure: In the post-Romney era, I worked with Bain Capital on several projects.)

Most important, Bain Capital is not now, nor has it ever been, some kind of Gordon Gekko-like, fire-breathing corporate raider that slashed and burned companies, immolating jobs wherever they appear in its path.

Wall Street has its share of the “vulture capitalists” that Texas Gov. Rick Perry enjoyed mocking in South Carolina earlier this week. But Romney was almost the furthest thing from Larry the Liquidator.

Instead, with modest exceptions (keep reading to learn more about these), Bain Capital was a thoroughly respectable — nay, eminent — investment manager that successfully discharged its responsibility of earning high returns for its investors by deploying capital in companies privately rather than by buying shares in the public market. (Hence the name, private equity.)

Over Bain Capital’s 27 years, its private investments generally fell into two buckets. The firm, particularly in its early years, made dozens of venture capital investments — taking stakes of a few million dollars or less in young companies, in hopes that they would grow and prosper. A good example: Its investment of $2.5 million in Staples in 1986.

As the years clicked along, Bain’s emphasis shifted toward what were then known as leveraged buyouts, now called private equity. Typically, those investments are larger, made in more developed companies and heavily financed with debt. In 1998, for example, Bain invested $189 million in the Domino’s pizza chain, from which it reportedly reaped a five-fold return.

Overall, Bain Capital’s record was extraordinary, among the best in the business. According to a Bain placement document, through the end of 1999 (effectively, when Romney left), the firm had achieved annual returns of 88 percent per year.

That is not only wildly more than the single-digit returns most investors achieve by buying stocks or bonds, it is far higher than those of typical private equity or venture capital firms.

Of course, a number of its early stage investments failed. That is the nature of venture capital — an industry not unlike baseball in that a .300 batting average can be an excellent performance. But who can quarrel with an investment firm trying to nurture and finance young companies?

The story of the private equity business is somewhat more complicated. Almost by definition, a private equity investment is made with the hope of improving the profitability of the “portfolio company,” as it is known in the parlance. Often, this means replacing management or reducing unnecessary head count — firing people.

While no one likes seeing jobs disappear, eliminating unnecessary overhead and even entire divisions if they cannot be made sufficiently profitable is at the heart of a successful economy — the process Joseph Schumpeter famously described as “creative destruction.” How strange for conservatives like Newt Gingrich and Perry to be questioning the core of free market economics.

I have no idea whether Bain Capital created 100,000 net new jobs, and I think Romney was silly to even engage in that debate. What we know for certain is that Bain Capital more than fulfilled its responsibility to a gaggle of investors, who were mostly foundations, endowments, pension funds and the like.

So what are the question marks (promised above) around the story of Romney and Bain Capital? First, it’s fair game to question the amounts of debt that are sometimes used in leveraged buyouts. While higher debt usually means higher returns — because debt is cheaper than equity, thanks in part to its tax deductibility — it also means higher risk of bankruptcy.

Bain had less than its share of bankruptcies, but it had a few — it appears four — that are particularly troubling. In all those cases, when the portfolio companies initially showed signs of promise, Bain took advantage of their progress to borrow more money, which it took out as a dividend. Later, the fortunes of each company turned down, ultimately into insolvency.

When Bain “releveraged” those companies and took the cash out, the investment managers of course had no idea that the companies would later falter. But with the benefit of hindsight, taking a more conservative approach and refraining from squeezing these dividends out of the companies would certainly have been more prudent.

Let’s be sure to keep these few problem children in perspective. During the Romney years, Bain made 77 significant investments — and a number of smaller ones. It made billions for worthy investors and, yes, doubtless created some incalculable number of net new jobs for the U.S. economy.

That’s the story of Bain Capital. It’s certainly fair game for any candidate’s opponents to dig into his record. But in Romney’s case, focusing on questions about his principles — and his current, staunchly conservative ones — could be more productive than trying to rewrite the firm’s history.