Beware of bubbles of false hope. Right now there is a lot of talk about how the U.S. economy is improving, but it is all a lie. The mainstream media can be very seductive. When you sit down to watch television your brain tends to go into a very relaxed mode. In such a state, it becomes easy to slip thoughts and ideas past your defenses. Sometimes when I am watching television I realize what the media is trying to do and yet I can still feel it happening to me. 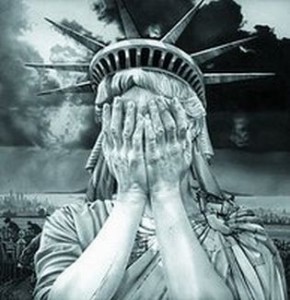 In this day and age, it is absolutely critical that we all think for ourselves.

Our debt is nearly 15 times larger than it was 30 years ago, and U.S. consumer debt has soared by 1700% over the past 40 years. Year after year the rate of inflation goes up faster than our incomes do, and this is absolutely devastating the middle class. Anyone who believes that we can keep doing the same things that we have been doing and yet America will still have a bright economic future is delusional. Until the long-term trends which are taking the U.S. economy straight into the toilet are reversed, any talk of a bright economic future is absolute nonsense.

In America today, we have such a short-term focus. We are all so caught up with what is happening right now. Our attention spans seem to get shorter every single year. At this point it would not be hard to argue that kittens have longer attention spans than most of us do. (If you have ever owned a kitten you know how short their attention spans can be.) Things have gotten so bad that most of our high school students cannot even answer the most basic questions about our history. If people are not talking about it on Facebook or Twitter it is almost as if it does not even matter.

But any serious student of history knows that is is absolutely crucial to examine long-term trends. And when you look at the long-term trends, it rapidly becomes apparent that the U.S. economy is in the midst of a nightmarish long-term decline.

The following are 24 statistics to show to anyone who believes that America has a bright economic future….

#1 Inflation is a silent tax that steals wealth from all of us. We continue to shell out increasing amounts of money for the basic things that we need, and yet our incomes are not keeping pace. Just check out the following example. Gasoline prices have been trending higher for several years in a row as one blogger recently noted….

#2 If you can believe it, the average American household spent approximately $4,155 on gasoline during 2011.

#3 Electricity bills in the United States have risen faster than the overall rate of inflation for five years in a row.

#4 Health care costs continue to rise at a very alarming pace. According to the Bureau of Economic Analysis, health care costs accounted for just 9.5% of all personal consumption back in 1980. Today they account for approximately 16.3%.

#5 Getting a college education has also become insanely expensive in America. After adjusting for inflation, U.S. college students are borrowing about twice as much money as they did a decade ago.

#8 There are fewer payroll jobs in the United States today than there were back in 2000 even though we have added more than 30 million extra people to the population since then.

#9 The U.S. economy is bleeding millions of good jobs. Greedy CEOs are systematically shipping them overseas and our politicians are standing around and doing nothing about it. This has gone on year after year after year. The following is from a recent article by Paul Craig Roberts….

We have made it legal for big corporations to send millions of jobs to countries where it is legal to pay slave labor wages, where the tax burden is much lighter and where there are barely any regulations. The following is a brief excerpt from a recent article posted on Economy in Crisis….

Back in the ‘80s, I called my friend Walter in California and asked: “On your next expansion we need a plant in South Carolina.” Walter replied: “We don’t produce anything in the United States. It’s all in China. China furnishes you the plant on a year-to-year basis. If your investment works out, you don’t have to pay any corporate tax; just reinvest it for another plant and more profit. If it doesn’t work out, you can walk away with no legacy costs. I send a quality controller to watch production. I check on it every day. I don’t have any labor, health, safety, or environmental concerns, and have time to play a round of golf.” The bleeding of jobs off-shore started in the ‘80s — now hemorrhages under Bush and Obama. Waiting for the economy to bounce back; calling this “the worst recession” is a bum rap. The reason the economy hasn’t bounced back since 2008 is because the economy is being off-shored.

#11 As a result of our insane economic policies, our trade balances are absolutely exploding. For example, the U.S. trade deficit with China in 2010 was 27 times larger than it was back in 1990.

#12 As you read this, there are millions of Americans out there wondering why they can’t find any jobs. According to Reuters, 23.7 million American workers are either unemployed or underemployed right now.

#17 Our incomes continue to go down. Since December 2007, median household income in the United States has declined by a total of 6.8% once you account for inflation.

#18 Unfortunately, middle class Americans have been seeing their incomes decline for a very long time. According to one study, between 1969 and 2009 the median wages earned by American men between the ages of 30 and 50 dropped by 27 percent after you account for inflation.

#19 Since 1971, consumer debt in the United States has increased by a whopping 1700%. Unfortunately, U.S. consumers have still not learned how to stay out of debt. According to a recent article posted on Financial Armageddon, the rate of personal savings in the United States is rapidly falling right now at the same time that the total amount of consumer credit is absolutely skyrocketing.

#21 The number of Americans on food stamps continues to set new all-time records. Just check out the following progression….

#22 The U.S. debt problem has gotten completely and totally out of control. Recently, the debt of the federal government surpassed 100% of GDP for the first time ever.

#24 Barack Obama’s proposed 2012 budget projects that the national debt will rise to 26 trillion dollars a decade from now. And his budget numbers are ridiculously optimistic.

All of the long-term economic numbers are progressively getting worse.

As things continue to get worse, people will become even more desperate. There are millions of people out there that find themselves unable to pay the mortgage and put food on the table for their families. When people hit rock bottom, they often find themselves doing things that they never dreamed that they would do.

Meanwhile, the big Wall Street banks just keep getting larger and more powerful. We have allowed the “too big to fail” banks to become much bigger than they have ever been before. The total assets of the six largest U.S. banks increased by 39 percent between September 30, 2006 and September 30, 2011.

Wealth is becoming increasingly concentrated at the very top even as the overall economic pie in America continues to get smaller.

As our economic problems become worse, more Americans than ever are trying to find ways to “escape”.

For example, according to one new government report one out of every six adults in America is a binge drinker.

There are even some Americans that are giving up completely. For example, one elderly man actually robbed a bank just so that he could get arrested and be taken to prison where he would get free health care.

But as I have written about previously, now is not the time to give up. Instead, now is the time to prepare for the great challenges that are ahead.

Almost every generation in history has been faced with great challenges and great hardships at some point.

Just because the U.S. economy is falling apart does not mean that life is over.

We are living during one of the most exciting times in all of human history. Instead of cowering in fear, let us embrace these times and focus on becoming the people that we were created to be.

In Case You Missed It:  UPDATE: Saudi Prince Offers Glimpse of Dazzling $500 Billion ‘Smart City of the Future’ Where You Will Own Nothing and Be Happy
Posted in Financial, Tyranny and tagged Debt Crisis, Obama, Obamanomics, Recession, United Socialist States of America.

I guess now that the Obama Regime has legalized sodomy for the troops and pushing for gay marriages in the...