Russia has given Iran its bear hug and warns Israel and the West that an attack on Tehran would be considered an attack on Moscow. The threat heightens the prospect of World War III in the event of a military strike on Iran.

“Iran is our neighbor,” Russia’s outgoing ambassador to NATO, Dmitry Rogozin, told reporters in Brussels. “And if Iran is involved in any military action, it’s a direct threat to our security.” 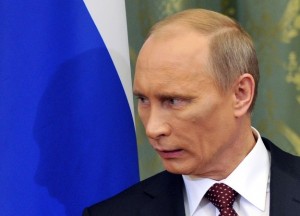 Kremlin Security Council head Nikolai Patrushev accused Israel of provoking the United States towards war against Iran, the Russian Interfax news agency reported Friday. “But at the same time, we believe that any country has the right to have what it needs to feel comfortable, including Iran,” he added.

Rogozin warned on Friday that more attacks on Iran could cause “a scorching Arab Summer.”

Russia also has come to the defense of Syrian President Bashar al-Assad, warning Western nations not to intervene in Syria with military forces. Russia is a major arms supplier to Syria and has a heavy investment in Iran’s nuclear facilities.

Japan also is drifting towards Iran, backtracking from its promise last week to back American sanctions aimed at persuading Iran to halt its unsupervised nuclear development.

Last week’s assassination of an Iranian nuclear scientist has aroused more “Death to America” and “Death to Israel” protest rallies in Iran, where the scientist was buried on Friday.

Iranian state radio said the 32-year-old scientist was involved with enriched uranium, a key ingredient for a nuclear weapon.

In Case You Missed It:  Boebert’s New Proposal Would Expose What Dems Hide in Bills – And They Hate It
Posted in Terrorism and tagged Iran, Israel, Nuclear Proliferation, Nuclear Weapons, Russia, United Socialist States of America.

Chart of the Week: How Countries Compare on Economic Freedom

Heritage and the Wall Street Journal released the 2012 Index of Economic Freedom on Thursday, ranking 179 countries on 10...