I guess now that the Obama Regime has legalized sodomy for the troops and pushing for gay marriages in the states now it goes to the extreme.

On Nov. 15, unknown to most of us, the Senate Armed Services Committee unanimously approved S. 1867, the National Defense Authorization Act, which includes a provision to repeal Article 125 of the Uniform Code of Military Justice (UCMJ). Article 125 of the UCMJ makes it illegal to engage in both sodomy with humans and sex with animals. 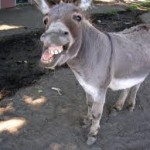 It states: “(a) Any person subject to this chapter who engages in unnatural carnal copulation with another person of the same or opposite sex or with an animal is guilty of sodomy. Penetration, however slight, is sufficient to complete the offense. (b) Any person found guilty of sodomy shall be punished as a court-martial may direct.”

“It’s all about using the military to advance this administration’s radical social agenda,” Perkins told CNSNews.com. “Not only did they overturn Don’t Ask Don’t Tell, but they had another problem, and that is, under military law sodomy is illegal, just as adultery is illegal, so they had to remove that prohibition against sodomy.”

Perkins said removing the bestiality provision may have been intentional–or just “collateral damage” “Well, whether it was inadvertent or not, they have also taken out the provision against bestiality,” he said. “So now, under the Uniform Code of Military Justice (UCMJ), there’s nothing there to prosecute bestiality.

Who were the Bestiality supporters? Click Here to View

Martin Luther King Day has arrived once again, and like clockwork, liberals are invoking King’s name to support their causes....