To assume that Iran will not close the Strait of Hormuz is to assume that primitive religious fanatics will perform cost-benefit analyses the way they are done at Wharton. They won’t, especially if the oil that is their life’s blood is threatened. If Iran does close the strait, we will fight an air and naval war derivative of and yet peripheral to the Iranian nuclear program, a mortal threat the president of the United States has inadequately addressed.

A mortal threat when Iran is not yet in possession of a nuclear arsenal? Yes, because immediately upon possession all remedies are severely restricted. Without doubt, Iran has long wanted nuclear weapons—to deter American intervention in its and neighboring territories; to threaten Europe and thereby cleave it from American interests in the Middle East; to respond to the former Iraqi nuclear effort; to counter the contiguous nuclear presences in Pakistan, Russia and the U.S. in the Gulf; to neutralize Israel’s nuclear deterrent so as to limit it to the attrition of conventional battle, or to destroy it with one lucky shot; to lead the Islamic world; to correct the security imbalance with Saudi Arabia, which aided by geography and American arms now outclasses it; and to threaten the U.S. directly.

In the absence of measures beyond pinpoint sanctions and unenforceable resolutions, Iran will get nuclear weapons, which in its eyes are an existential necessity. We have long known and done nothing about this, preferring to dance with the absurd Iranian claim that it is seeking electricity. With rampant inflation and unemployment, a housing crisis, and gasoline rationing, why spend $1,000-$2,000 per kilowatt to build nuclear plants instead of $400-$800 for gas, when you possess the second largest gas reserves in the world? In 2005, Iran consumed 3.6 trillion cubic feet of its 974 trillion cubic feet of proven reserves, which are enough to last 270 years. We know that in 2006—generation exceeding consumption by 10%—Iran exported electricity and planned a high-tension line to Russia to export more.

Accommodationists argue that a rational Iran can be contained. Not the Iran with a revered tradition of deception; that during its war with Iraq pushed 100,000 young children to their deaths clearing minefields; that counts 15% of its population as “Volunteer Martyrs”; that chants “Death to America” at each session of parliament; and whose president states that no art “is more beautiful . . . than the art of the martyr’s death.” Not the Iran in thrall to medieval norms and suffering continual tension and crises.

Its conceptions of nuclear strategy are very likely to be looser, and its thresholds lower, than those of Russia and China, which are in turn famously looser and lower than our own. And yet Eisenhower and Churchill weighed a nuclear option in Korea, Kennedy a first strike upon the U.S.S.R., and Westmoreland upon North Vietnam. How then can we be certain that Iran is rational and containable? 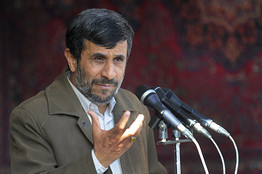 Inexpert experts will state that Iran cannot strike with nuclear weapons. But let us count the ways. It has the aerial tankerage to sustain one or two planes that might slip past air defenses between it and Israel, Europe, or the U.S., combining radar signatures with those of cleared commercial flights. As Iran increases its ballistic missile ranges and we strangle our missile defenses, America will face a potential launch from Iranian territory.

Iran can sea-launch from off our coasts. Germany planned this in World War II. Subsequently, the U.S. completed 67 water-supported launches, ending as recently as 1980; the U.S.S.R. had two similar programs; and Iran itself has sea-launched from a barge in the Caspian. And if in 2007, for example, 1,100 metric tons of cocaine were smuggled from South America without interdiction, we cannot dismiss the possibility of Iranian nuclear charges of 500 pounds or less ending up in Manhattan or on Pennsylvania Avenue.

Much easier before Iran recently began to burrow into bedrock, it is still possible for the U.S., and even Israel at greater peril, to halt the Iranian nuclear program for years to come. Massive ordnance penetrators; lesser but precision-guided penetrators “drilling” one after another; fuel-air detonations with almost the force of nuclear weapons; high-power microwave attack; the destruction of laboratories, unhardened targets, and the Iranian electrical grid; and other means, can be combined to great effect.

Unlike North Korea, Iran does not yet possess nuclear weapons, does not have the potential of overwhelming an American ally, and is not of sufficient concern to Russia and China, its lukewarm patrons, for them to war on its behalf. It is incapable of withholding its oil without damaging itself irreparably, and even were it to cease production entirely, the Saudis—in whose interest the elimination of Iranian nuclear potential is paramount—could easily make up the shortfall. Though Iran might attack Saudi oil facilities, it could not damage them fatally. The Gulf would be closed until Iranian air, naval, and missile forces there were scrubbed out of existence by the U.S., probably France and Britain, and the Saudis themselves, in a few weeks.

It is true that Iranian proxies would attempt to exact a price in terror world-wide, but this is not new, we would brace for the reprisals, and although they would peak, they would then subside. The cost would be far less than that of permitting the power of nuclear destruction to a vengeful, martyrdom-obsessed state in the midst of a never-subsiding fury against the West.

Any president of the United States fit for the office should someday, soon, say to the American people that in his judgment Iran—because of its longstanding and implacable push for nuclear weapons, its express hostility to the U.S., Israel and the West, and its record of barbarity and terror—must be deprived of the capacity to wound this country and its allies such as they have never been wounded before.

Relying solely upon his oath, holding in abeyance any consideration of politics or transient opinion, and eager to defend his decision in exquisite detail, he should order the armed forces of the United States to attack and destroy the Iranian nuclear weapons complex. When they have complied, and our pilots are in the air on their way home, they will have protected our children in their beds—and our children’s children, many years from now, in theirs. May this country always have clear enough sight and strong enough will to stand for itself in the face of mortal threat, and in time.

Mr. Helprin, a senior fellow at the Claremont Institute, is the author of, among other works, the novels “Winter’s Tale” (Harcourt) and “A Soldier of the Great War” (Harcourt).

From The Wall Street Journal

Is Coal de Minimus? The Problem with the Alabama Ethics Commission

In the wake of a number of corruption scandals, the Alabama legislature endeavored to reform their system by enacting tough...