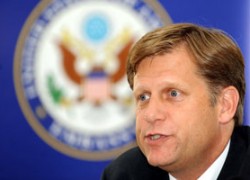 Russian state television has launched an all-out assault on the new U.S. Ambassador Michael McFaul—undeservedly so, although not unexpected.

Russia’s Channel One, run by All-Russia State Television and Radio Broadcasting Company (VGTRK), aired a hostile report this week aimed at the ambassador as he begins his tenure in Moscow.

The report attacked McFaul personally and hit the Obama Administration for choosing an ambassador who is not a career diplomat. McFaul is an academic who served as Special Assistant to the President and a Senior Director at the National Security Council.

Channel One won’t have any of that. It vituperated: “This is the second case of the violation of this tradition over the past 30 years. A first exception was [former U.S. envoy to Russia] Bob Strauss, appointed by [former President George H.W.] Bush, which, again, was meant to serve the collapse of the Soviet Union, a characteristic detail.” The venomous attack on Bob Strauss is particularly unfair, as the man spent the rest of his life promoting better U.S.–Russian relations.

McFaul is fluent in Russian, knows the country, and has worked there in the past. In fact, this is the motivation cited for the Kremlin’s temper tantrum. Russian state TV questioned McFaul’s general competence to be an ambassador: “The fact is that McFaul is not an expert on Russia. He is a specialist in a particular pure democracy promotion.” The report accuses him of having an agenda of an “orange revolution” aimed to undermine the Putin regime.

The Kremlin is livid that in his first official function at the Moscow Embassy, he met with human rights activists. McFaul is being denounced publicly for working on behalf of the “so-called democratic movement” in Russia during the early 1990s, when he worked in the country on behalf of the National Democratic Institute, “an organization known for its proximity to the U.S. intelligence services,” the TV announcer said with a straight face.

America-bashing has become a knee-jerk reaction for the Russian leadership. In the Heritage Backgrounder “Russian Anti-Americanism: A Priority Target for U.S. Public Diplomacy,” Ariel Cohen and Helle Dale explain:

Russian anti-Americanism remains an entrenched and politically expedient phenomenon among the country’s governing elites. This may seem puzzling, given the rapprochement between Russia’s political leadership and the Obama Administration. Yet the idea of “resetting” the relationship between the two, as conceived by President Obama and Secretary of State       Hillary Clinton, rests on the profound fallacy that the current Russian leadership and the United States share common values. From the Kremlin’s perspective, anti-Americanism is a strategic tool for pursuing domestic and foreign policy goals. It has remained this way for almost the past   100 years.

Mike McFaul, despite his genuine desire to improve U.S.–Russian relations, ran into the buzz saw of America-bashing, his past activities notwithstanding. He is the chief architect of the Obama Administration’s “Reset” policy with the Kremlin, which aims to strengthen ties between Washington and Moscow. In fact, as we predicted, McFaul’s reset policy, betting on the wrong horse—President Dmitry Medvedev—caused the acerbic reaction by Vladimir Putin. Furthermore, it may endanger his ability to interact with Russia’s presumed next president. Most probably, this personal antipathy is the reason behind the unprecedented attack.

The Obama Administration should denounce this unprovoked attack and make a strong show of support for its ambassador. However, this is not its style. The President would not stand up for his Secretary of State when Putin attacked her and accused her of giving a signal to popular protest in the aftermath of stolen parliamentary elections. Let’s hope that Ambassador McFaul would get more support than the Secretary of State. But don’t hold your breath.

Israel Refuses to Notify USA in Case of Iran Strike

Gen. Martin Dempsey arrives Thursday, Jan. 19, for his first visit to Israel as Chairman of the Joint US Chiefs...