Lebanese Forces party leader Samir GeaGea on Friday said Hizbullah must understand “the game is over.” 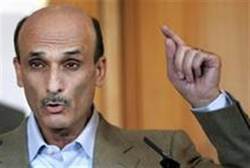 “In my opinion, events in the region, starting with Syria and ending in Iran, are capable of creating an appropriate atmosphere for the brothers in Hezbollah to be convinced that the game is over and they have to surrender their arms to the state ,” Geagea told the Egypt-based Rose al-Yusef newspaper.

Earlier this week GeaGea told the pro-Hizbullah As-Safir newspaper “I believe that it is in Hizbullah’s best interest to quickly begin repositioning itself internally.”

“If I were in their shoes… I would take an immediate and brave step — which could be difficult,” he admitted, “but is nevertheless necessary, to engage in serious and direct negotiations with the main [Lebanese] parties… so as to reach a historic compromise on arms and all other pending issues — because we must admit that Lebanon cannot continue to exist without the Shi’ites.”

Geagea, along with his allies in the March 14 coalition, has repeatedly called on Hizbullah to disarm and disband its terror militias, saying Hizbullah’s arms present an obstacle to the establishment of a state capable of defending itself.

He has also charged Hizbullah with maintaining a unilateral foreign policy and drawing Lebanon into unwanted and destructive wars with Israel in the name of ‘resistance.’

Geagea said on Friday that while the collapse of President Bashar Assad’s government might take several months, it would happen nonetheless.

“According to my estimates, [Assad’s government will survive] no longer than the end of 2012,” Geagea said.

Assad has been a key-backer of the Hizbullah terror group, as well as a strategic bridge to Hizbullah’s Iranian allies. The fall of his regime is widely seen as potentially isolating Hizbullah.

Both Western and Gulf Arab nations have accused the terror group of stirring up trouble in the region while showing open support for pro-Western and pro-Saudi opposition figures in the Lebanon.

Hizbullah claims its weapons are necessary to defend Lebanon from Israel and says the tripartite formula of the “army, people, and the resistance,” supported by Prime Minister Najib Mikati and previous governments, is the only means to defend the country.

However, Mikati ally President Michel Sleiman this week put Hizbullah on notice saying it was time to disarm – shortly after Hizbullah rejected a UN demand that it do just that.

In December 2012, Sleiman broke pointedly with the so-called tripartite formula saying “the army, democratic governance, and a strong economy” made Lebanon secure.

According to economist John Williams of Shadow Government Statistics, the unemployment rate for the month of December 2011 was closer...