According to economist John Williams of Shadow Government Statistics, the unemployment rate for the month of December 2011 was closer to 22.4 percent–not the 8.5 percent reported by the Bureau of Labor Statistics.

Obama’s 8.5% is far removed from reality. 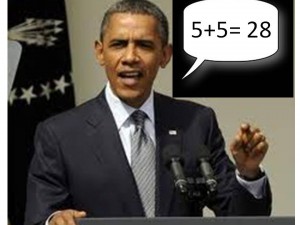 To get closer to the real number, we must consult the (U6) figure that is often touted as ‘true unemployment’. This figure adds into the equation those who fall under the contemporary definition of ‘discouraged worker’ and those who can only find ‘part-time’ work.

Today’s definition of a discouraged worker is one who has not found work within the last year. Prior to 1994, a discouraged worker was defined as one who had not found work within the last month. That’s a big discrepancy. If we add those lost souls back into the equation, we come up with a more realistic unemployment rate of right around 22.4%. That’s less than three clicks shy of the 25% often cited for the worst levels of the Great Depression in 1933. That 25% unemployment figure was reflective of all workers both on and off the farm.

Many economists, intent on disproving any comparison of today’s unemployment with that of the ‘Great Depression’, will often cite the non-farm unemployment figure of 34%. But it should be pointed out that during that time, 27% of America’s employed worked on the farm. Today that number is only 2%.

It’s just another example of government math. They really think we are this stupid:

In Case You Missed It:  Biden Says Refilling Oil Reserve at $70 Per Barrel Will Make Money – Trump Wanted to Refill Reserves When Oil Was $24/Barrel, But Democrats Blocked Him (VIDEO)
Posted in Financial, Tyranny and tagged Obama, Recession, Unemployment, United Socialist States of America.

A poll conducted among U.S. citizens has found that 35 percent of them believe that the U.S. should attack Iran...