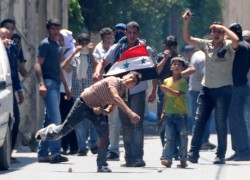 After 10 months of anti-government protests in Syria and some 5,000 dead amid a violent government crackdown, the United States is preparing to close the U.S. embassy in the capital city of Damascus and evacuate all American personnel by the end of January, The Washington Post reports. The embassy will remain open only if President Bashar al-Assad provides enhanced protection.

The Heritage Foundation’s James Phillips says that the closure of the embassy is a prudent move in the face of hostile policies of the Assad regime:

The Assad regime orchestrated attacks on the U.S. embassy in July and claimed that it was spontaneous protest of Syrian people against U.S. policy. The U.S Ambassador also faced threats of violence and was recalled from Damascus last year for a time.

The Obama Administration’s apparent decision comes after three years of efforts to engage with the Assad regime — a policy that has failed miserably.

Phillips writes in his new paper, Preparing for a Post-Assad Syria, that “the regime’s systematic attacks against peaceful demonstrations have provoked an armed rebellion, which could soon morph into a sectarian civil war.” The best assistance the U.S. can offer, he writes, is to help speed the fall of Assad’s regime:

Washington should work with its European allies, Turkey, and willing Arab states to escalate sanctions on the Damascus regime, provide humanitarian relief to Syrian refugees, and provide diplomatic and economic support for the Syrian opposition. But Washington should hold back from a direct military intervention, which is likely to create more problems than it solves.

Click here for more in Preparing for a Post-Assad Syria.

Congressman Ron Paul showed in the January 17th Fox News debate why he would be so dangerous as president and commander-in-chief. He...