Congressman Ron Paul showed in the January 17th Fox News debate why he would be so dangerous as president and commander-in-chief. He believes, in a twist on the Judeo-Christian Golden Rule, that our Islamist enemies are only assaulting us because we assaulted them first. Sorry, appeaser-in-chief Paul, but the Koran commands devout jihadists to use whatever means are necessary to destroy all infidels, no matter what we have done or plan to do to them. 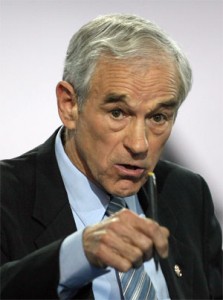 As part of an exchange involving the appropriate response to al Qaeda and their Taliban supporters, Paul exclaimed:

My point is, if another country does to us what we do others, we’re not going to like it very much. So I would say that maybe we ought to consider a golden rule in — in foreign policy. Don’t do to other nation… what we don’t want to have them do to us.

Paul even offered the absurd analogy comparing our killing of the mass murderer Osama bin Laden on Pakistani soil, where he was provided a sanctuary, to the Communist Chinese government deciding to go after a Chinese dissident seeking freedom in the United States. Newt Gingrich properly labeled this comparison “utterly irrational.”

Ron Paul may have some good ideas on reining in the power of the Federal Reserve and on the need to control federal spending. But he is clueless in dealing with our Islamist enemies. He either does not understand or refuses to believe the ideology that drives them. They want to kill us because our nation is governed on the basis of principles derived from Judeo-Christian beliefs including the true Golden Rule. They hate us because of who we are, not for any alleged harm that we’ve ever caused them.

Only three years after the United States won its independence, when there was no Jewish state for Muslims to resent, and no American troops on Muslim soil, Thomas Jefferson, then U.S. ambassador to France, and John Adams, then U.S. Ambassador to Britain, learned from a Muslim ambassador to Britain why the Muslims were so hostile towards Americans. Jefferson and Adams were attempting to negotiate a peace treaty with the Muslim “Barbary pirates,” an exercise that ultimately proved to be futile.

As Jefferson and Adams later reported to Congress, the Muslim ambassador explained to them that Islam

Was founded on the Laws of their Prophet, that it was written in their Koran, that all nations who should not have acknowledged their authority were sinners, that it was their right and duty to make war upon them wherever they could be found, and to make slaves of all they could take as Prisoners, and that every Musselman [Muslim] who should be slain in Battle was sure to go to Paradise.

All that Ron Paul needs to do is take a look at the Koran itself, cited by that Muslim ambassador more than 200 years ago, to understand the source of the  jihadist ideology that we are still fighting today.

Here is a sample:

• “O ye who believe! Take not the Jews and the Christians for your friends: They are but friends to each other.” (Koran 5:51)

• “Shall I tell you who, in the sight of God, deserves a yet worse retribution than these? Those [the Jews] whom God has rejected and whom He has condemned, and whom He has turned into monkeys and pigs because they worshiped the powers of evil.” (Koran 5:60)

• “I will inspire terror into the hearts of unbelievers: you smite them above their necks and smite all their fingertips off of them.” (Koran, 8:12)

• “So when the sacred months have passed away, then slay the idolaters wherever you find them, and take them captives and besiege them and lie in wait for them in every ambush, then if they repent and keep up prayer and pay the poor-rate, leave their way free to them; surely Allah is Forgiving, Merciful.”

•  “[F]ight those who believe not in Allah nor the Last Day, nor hold that forbidden which hath been forbidden by Allah and His Messenger, nor acknowledge the religion of Truth, (even if they are) of the People of the Book [Christians and Jews], until they pay the Jizya with willing submission, and feel themselves subdued.” (Koran, 9:29)

• “When we decide to destroy a population, we send a definite order to them who have the good things in life and yet sin. So that Allah’s word is proven true against them, then we destroy them utterly.” (Koran, 17:16-17)

Islamist apologists argue that the Koran also contains verses calling for tolerance and understanding.  If the verses written while Muhammad was living in Mecca, where he and his followers were then surrounded by much stronger non-Muslim populations, constituted the entirety of the Koran, they may have had a point. However, the milder verses were superseded by the far more war-like and intolerant verses written during Muhammad’s time in Medina where he successfully launched his jihad of conquests against non-believers, especially against Jews who refused to convert to Islam. Moreover, when one examines the real meaning of jihad according to Muhammad from other primary sources such as Bukhari (the Hadith, which are oral traditions relating to the words and deeds of Muhammad), the fact is that 97% of the jihad references are about war and 3% are about so-called inner struggle.

Sayyid Qutb, an Egyptian author, educator, and the leading Islamic scholar who was a member of the Egyptian Muslim Brotherhood in the 1950s and ’60s, wrote:

It may happen that the enemies of Islam may consider it expedient not to take any action against Islam, if Islam leaves them alone in their geographical boundaries to continue the lordship of some men over others and does not extend its message and its declaration of universal freedom within their domain. But Islam cannot agree to this unless they submit to its authority by paying Jizyah, which will be guarantee that they have opened their doors for the preaching of Islam

Those who say that Islamic Jihaad was merely for the defense of the “homeland of Islam” diminish the greatness of the Islamic way of life.

This is the ideology that inspired Osama bin Laden and his replacement as the current leader of al Qaeda, Ayman Zawahiri. A “die or submit” ideology is the antithesis of the Golden Rule that is so central to Judeo-Christian beliefs. If Iran, al Qaeda or other jihadists were ever armed with nuclear bombs, we would face an existential threat. Yet Ron Paul believes that the solution is to simply pretend the threat only exists because of our own foreign policy.

In my previous article on Ron Paul’s dangerous foreign policy views, I discussed Paul’s perverted moral equivalency version of the Golden Rule in dealing with the Iranian theocracy. Referring to the U.S.-Iranian conflict and justifying Iran’s pursuit of nuclear weapons (which he simultaneously denies is happening), Paul said during the August 11, 2011 GOP presidential debate in Iowa:

It’s been going on and on because we just plain don’t mind our own business. That’s our problem…Why wouldn’t it be natural that they might want a weapon? Internationally, they’d be given more respect.

Again, to be charitable, Paul is way out in left field. The fanatics ruling Iran today do not believe in the Golden Rule as we understand it in the West. They believe instead in a “golden age” when the big Satan (the United States) and the little Satan (Israel) will be destroyed. This will hasten the arrival of the 12th Imam, otherwise known as the Mahdi, whom Iran’s rulers look to as Islam’s messianic savior.

For example, Ayatollah Khamenei linked Israel and the United States together as the mortal enemies of the 12th Imam and declared through a spokesman in August 2009:

We have to train honest forces that can stop the obstacles that may hinder the coming of the Mahdi like the United States and Israel.

The spokesman described Ayatollah Khamenei, Iran’s supreme leader, as “a direct representative” of the Mahdi and said following his orders is like “obeying the guided one.

Ron Paul is on a fool’s gold mission in believing that applying the Golden Rule in dealing with our Islamist enemies will lead to any result other than the killing of many more innocent Americans. (Source: Front Page Mag)

Pakistan announced Thursday that it plans to reopen supply routes to NATO forces in Afghanistan, but will impose tariffs. Islamabad...