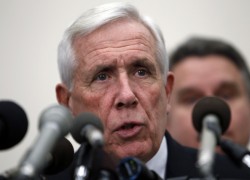 With economic issues dominating the domestic political agenda and much of our foreign policy focused on combating terrorism, systematic violations of political and religious rights by some of the world’s most tyrannical regimes receive less attention than perhaps they should.

Rep. Frank Wolf, a Republican representing Virginia’s 5th District, is out to rectify that shortcoming. His new book, “Prisoner of Conscience: One Man’s Crusade for Global Human and Religious Rights,” discusses his work to champion human rights across the world, and expose the gross violations he has come across in the process.

Wolf recently visited Heritage and joined us on Scribecast to discuss the book and the issues it covers.

Listen to the interview with Rep. Frank Wolf on this week’s Scribecast

“There are more [human rights abuses] taking place today than perhaps any other time in the history of our country, certainly in the 21st century and the 20th century,” Wolf explained. Those abuses span the globe: from South America to Southeast Asia to North Africa to Eastern Europe to the Middle East.

The first step the United States should take in defense of the oppressed, Wolf insisted, is to “publicly advocate for them.” He recalled former President Ronald Reagan’s forceful advocacy for those denied their freedom, and lamented that few in contemporary American politics seem willing to do so with the same vigor and consistency.

But concrete policies can be put in place to combat abuses, he added, including making foreign aid conditional. But American policymakers, he noted, can’t muster the political will to go after what he sees as one of the worst offenders, China, simply due to this country’s massive debts owed to Beijing. “We don’t have the leverage to stand up to China,” Wolf said. “That’s why when Obama goes to China, he never raises the issue.”

Aside from human rights, Wolf said he has little confidence that Congress will be able to get the national debt under control. Lawmakers seem hesitant to address the issues actually driving the debt such as Social Security and Medicare.

The podcast runs about 15 minutes. It was produced with the help of Hannah Sternberg. Listen to previous interviews on Scribecast or subscribe to future episodes.

After 10 months of anti-government protests in Syria and some 5,000 dead amid a violent government crackdown, the United States...