Germanic immigrants drove the government of the Late Western Roman Empire into penury and extinction.  Is it possible Mexican, Muslim  and other immigrants from the third world likely to send the governments of USA and Europe to a similar fate?  Is the United States of America and Europe the only western nations facing such a demise? 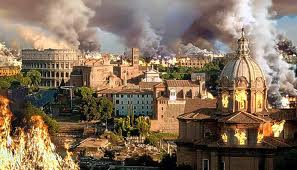 Let us admit a salient fact from the beginning; and that is the Late Western Roman Empire disappeared a very long time ago for reasons neither entirely understood, nor agreed upon to this day by historians. Yet despite this caveat, the demise of the Roman government in the West demonstrates the veracity of the adage that all empires fail for the same reason; in the end, it costs more to maintain an empire than the empire can afford to pay. But is this adage shopworn and of no use in the modern world? And is the disappearance of the Late Western Roman Empire simply an obscure event from a long ago and irrelevant past? Let us travel back to that far and distant land and see.

A tourist traveling throughout the Western Empire in 405 AD would have found it modestly prosperous and relatively peaceful. True, millions would have been living in abject poverty in an economy based on subsistence agriculture. The middle class would have been small and embattled with most of the wealth concentrated at the top of the social and economic pyramid, about 2%-3% of the population. All in all it was not as wealthy as the Eastern Empire, but it was not poverty stricken either. Literate and numerate people were uncommon but not rare, and there were enough of them to carry on day to day affairs. Dialects of Latin and Greek were widely spoken, so that a tourist would have been able to converse with people throughout his travels.

A tourist would have found that the most prominent and successful institution was the army, a disciplined, well trained, and altogether formidable fighting force. Right behind the army in prestige would have been the Church, and it too was disciplined, well trained, and formidable. There was an emperor in Milan, the capital, governors and military commanders in the provinces, all served by a minimally competent, albeit corrupt bureaucracy. The Church, headed by the pope in Rome, maintained a parallel structure, but, unlike the Eastern Empire, kept something of an arms length relationship with the civil and military authorities. Fifty years later all this was gone. Why? It had been destroyed by illegal German immigrants, equal to perhaps 10% of the native population.

Not that Germanic people were rare and unusual. They had been seeping in for almost two hundred years. What changed after 405 AD were the numbers. They started crossing the Rhine by the tens of thousands and kept coming. They may have been fleeing starvation due to crop failure brought on by the onset of a little ice age. But no one knows for sure.  Historians, however, are sure the army was unable to stop them, and the native population didn’t seem to mind mush like we are seeing today.  There are even indications that they may have welcomed the Germanic people.   Here we come to the reason for the empire’s disappearance, and why it matters a great deal today. You see the native population didn’t care because they got a better deal under the Germanic for a time. 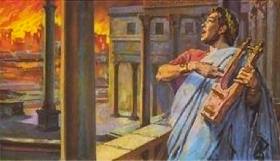 The empire taxed primarily by taking food and requiring labor, while the Germanic did not. They didn’t seem interested in taxing at all.  Since most of the land was owned by a few fabulously wealthy owners why should the natives care if the Germans took it from them?  Since the empire was sparsely populated it appears there was plenty of land to go around. The Germans squatted on the great estates, and the native population squatted next to them.  Soon the native population was refusing to pay taxes just like the Germanic. Without the tax base, the emperor couldn’t pay the soldiers who melted away, many becoming brigands. When the emperor and his governors couldn’t supply the cities with food they were abandoned. The tipping point was reached within a decade, and forty years after that the emperors had little authority beyond the new capital located at Ravenna on the Adriatic Sea.

So where does this leave the governments of the United States and other western nations regarding illegal immigrants from Mexico and other parts of the third world? With a bit of a sticky wicket, I fear. Now, compared to modern nations and governments, the Late Western Empire was a poorly coordinated and sprawling affair based on unproductive farming, and so had a low break even point. That is to say, it didn’t take much to upset the apple cart. Transportation and communications were slow, costly and not always reliable. Hence the cost of maintaining the government was quite expensive compared to its economic output; and so, was vulnerable to manifold disruptions such as rebellions by disloyal generals, riots, depopulation due to plagues, and in the end illegal immigrants who looted, plundered, and settled down wherever and whenever they pleased.

As I suggested, modern western nations are stunningly wealthier, and far more flexible than the brittle Late Western Roman Empire. And yet, even here there are limits. During the past half century the costs of maintaining these nations has risen dramatically, while the core of their productive economies, manufacturing, has been transferred to the third world where labor costs are far less. In a sense, the United States and other western nations have been exporting their wealth to the third world and importing third world poverty. This can’t go on forever. Manufacturing, the core wealth producing part of an economy can be rebuilt over time, in theory. But can national cohesion, wrecked by the importation of alien and often hostile people without any genuine attempt to assimilate them, be restored? Probably not.

Will the native populations of western nations, especially in the United States, watching their standard of living decline, while any new wealth, generated by this system, is entirely concentrated at the top of the social and economic pyramid, be counted on to support their governments? Why should they? Will they remain loyal to governments who renege on long standing promises, which were financed by taxes they paid, in order to pay benefits to immigrants who have paid virtually nothing? It’s doubtful. Does this mean that the end of the western nations, especially the United States, is in sight? As I said at the beginning of this article, maybe.

President Obama will deliver his third State of the Union address on Tuesday night. According to a preview video released...