Islamist parties won a large majority of the votes in Egypt’s election to parliament, held Saturday. 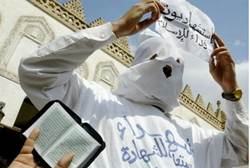 The Head of the Election Committee said that the Freedom and Justice party, which represents the Muslim Brothers in Egypt, received 47% of the total vote, and Al Nour, a hard-line Salafist party, has another 25%.

The Muslim Brotherhood is expected to receive 235 seats out of the 498 seats in Parliament. Al Nour will receive 121 seats.

Muhammad Badi’, leader of the Muslim Brotherhood, announced Saturday that his movement would not endorse any of the Islamist candidates for the presidency, “so as not to cause concerns among international elements as happened with Hamas.”

This was a reference to the brutal takeover of Gaza in June 2007, by the Hamas terror organization, which was a diplomacy and public relations disaster for Hamas.  The Hamas terrorists have since used Gaza as a base for constant rocket attacks against Israel, used their own citizens – including children – as live shields and launched rockets from civilian areas, gradually imposed Shariah law in Gaza, and continue to repeat their goal of eradicating Israel.

Illegal Immigration Led To The Fall Of The Roman Empire

Germanic immigrants drove the government of the Late Western Roman Empire into penury and extinction.  Is it possible Mexican, Muslim...