The Jerusalem Magistrates Court on Thursday ruled that the Arabs who filed the petition against the community of Migron will pay 7,000 shekels in compensation to the residents of the community and 12,000 shekels to the State of Israel. 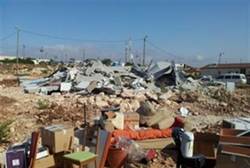 The ruling comes after the Arabs withdrew their lawsuit when they were unable to present proof of ownership of the land on which the community was built.

She added that the plaintiffs will not be allowed to file any further lawsuits in the matter.

Migron came under a demolition threat after ultra-leftist group Peace Now filed a motion to the Supreme Court on behalf of several Arabs, who demanded that Migron be demolished because it was allegedly “built upon their private lands.” The Supreme Court ruled that the community must be demolished by the end of March.

MK Zevulun Orlev (Jewish Home) has introduced a bill that would forbid eviction and demolition orders for Jewish communities in Judea and Samaria that have stood for four years and have at least twenty families. The bill would save Migron, but Prime Minister Binyamin Netanyahu has instructed the Ministerial Committee for Legislation not to vote on it.

Netanyahu remains opposed to the bill despite a recent poll showing that Likud votersoverwhelmingly back the proposal – with a significant minority saying they will consider switching their allegiance if his faction refuses to move to make it law.

Last week, Knesset Speaker MK Reuven Rivlin expressed his belief that one way or another, Migron would be “legalized. If the government doesn’t do it, the Knesset will.”

Representatives of the residents of Migron responded to Thursday’s ruling and said, “The real story behind the injustice done to Migron is being revealed. The court has spoken after the Palestinians were led by Peace Now to the court without proof. This is further proof that the Palestinians who are demanding ownership of the land have no evidence to prove it. We will continue to work to ensure Migron remains on the ground. It is time for the Prime Minister to address the terrible injustice that has been done and bring the laws legalizing Migron to a vote as soon as possible.”

Terrorists Use New Method: Dazzle the Driver, then Throw a Rock

Palestinian Authority Arab terrorists are continuing the rock attacks at Israeli vehicles and it looks like they’ve come up with...