Although French president Nicholas Sarkozy has not yet announced his candidacy, one can say that the French presidential campaign began today as Francois Hollande kicked off his campaign at Bourget before 10,000 Socialist Party activists. 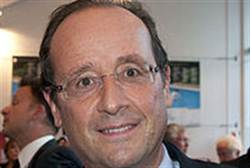 In the spirit of Barack Obama, the campaign slogan “change is now” (le changement, c’est maintenant)  was unfurled on the French tricolor stage.

The speech offered a large quantity of “red meat” for the French left. The socialist nightmare is if too many voters stray afield during the first round when they vote for an assortment of leftist candidates, feeling secure in the knowledge that they can vote for the candidate of the united left in the second round. The problem is that this tendency poses a risk this time. Either Marine Le Pen, the National Front candidate, or Francois Bayrou of the centrist Democratic Movement, could pull off a surprise.

Therefore Hollande promised the audience “in 3 months, we will make the left win and we will succeed.” The candidate promised jobs, he promised urban solidarity in the form of low income housing – all this without sacrificing public finance, as the budget would be balanced by 2017. The solution?: Tax the rich at higher rates in the name of justice.

Hollande pressed the hottest button by attacking the banks: “I would like to tell you who is my true adversary.  It does not have a name, a face or a party. It will never present its candidacy and will never be elected and still it governs: this adversary is the world of finance. For 20 years it has taken control of our lives and our policies.”

His opponent Sarkozy carried the youth vote in 2007 and Hollande made a specific appeal for the youth vote and promised that the end of his five-year term the number of young people leaving the school system without any qualifications would be cut in half.

While appealing to the left, Hollande also tried to ward off defection to Le Pen, touching on the problem of crime, saying “insecurity is social injustice.” If elected, he would create priority security zones where the rate of delinquency is the highest.

For those who believe that France had been permanently eclipsed by Germany, ollande promised “in January 2013, if the French give me a mandate I will propose to the German Chancellor drawing up a new Franco-German treaty, half a century after the treaty of [trawls]’s de Gaulle and [Konrad] Adenauer.

Hollande is also looking towards the second round where he will need the support of other parties to win. To entice them he promised that his presidency would not be a one-man show and would not even be a one party show.

In Case You Missed It:  The DOLLAR will DIE... and the Ruble will DOMINATE as "commodities-based" currencies make paper fiat obsolete
Posted in Freedoms and tagged Campaign, Election, Financial, France, Freedom, Nicolas Sarkozy, Socialism.

Yemeni President Ali Abdullah Saleh officially left his nation Sunday on his way to the U.S. for medical treatment, The...