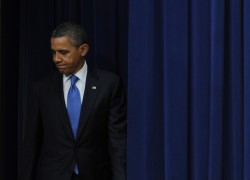 “Economic fairness” is expected to be the topic of President Barack Obama’s State of the Union address on Tuesday night, during which he will likely sound the same populist notes of progressivism that America heard last month in his speech in Osawatomie, Kansas.

Fairness, though, is in the eye of the beholder. And in the President’s eye, “fairness” means equality of outcomes, not of opportunity. He says he will “lay out a blueprint for an American economy that’s built to last,” but if his Kansas speech is any indication, that blueprint will run counter to the very principles on which our nation was founded.

Throughout his Osawatomie speech, the President spoke of “fairness” repeatedly, and he pointed to the federal government as the great instrument by which that fairness can be achieved—by way of more government power, federal education programs, economic regulations, and infrastructure spending. Raising taxes on the wealthy is the “fair” way that the President plans to pay for his expanded state, relying on an “us” versus “them” class warfare rhetoric.

The resulting policy prescription would ultimately lead to a “new governing class that insists on enforcing political and economic ‘fairness’ rather than letting us govern ourselves,” as The Heritage Foundation’s Matthew Spalding, vice president for American studies, explains. What’s more, Spalding writes, the idea that the government can and should step in to guarantee economic fairness is contrary to the founding principles that make America so great—and that enable its citizens to achieve success:

Throughout history and today in many parts of the world, political rule is the privilege of the strongest and the most powerful. America is exceptional because it is dedicated to the principle of universal human liberty: that all are fundamentally equal by nature and equally endowed with unalienable rights to life, liberty, and the pursuit of happiness. This principle and the constitutional framework of law that enlivens it are the foundation of the American Dream.…

What is truly revolutionary about the United States is that the ladder of opportunity became available to everyone. As a result, poverty has been vastly diminished. Even more important, it is no longer a permanent condition from which there is no real possibility of escape.

But about a hundred years ago, there arose a different dream: that government could engineer a better society, rather than simply leaving the people free to create one. Progressive reformers were convinced not only that the American founders were wrong in their assumptions about man and about the necessity of limited government, but also that advances in science would allow government to reshape society and eradicate the inequalities of property and wealth that had been unleashed by individual rights, democratic capitalism, and the resulting growth of commerce and business.

A more activist government, built on evolving rights and a “living” Constitution, would redistribute wealth and level out differences in society through progressive taxation, economic regulations, and extensive social-welfare programs, all centrally administered by expert bureaucrats.

For the past three years, we have witnessed President Obama attempt to construct that progressive America—whether it was through the expansion of the state in Obamacare, the bailing out of the auto industry, the proliferation of regulations under the Dodd–Frank regulatory reform bill, or the illegal appointments to the unrestrained Consumer Financial Protection Agency and the National Labor Relations Board. With the President’s speech tomorrow night, we can expect to hear more of the progressive philosophy that undergirds the President’s policies and a vision of America that is quite different from the one the Founders intended.