”When Al- Qaeda attacked our country on 9-11, Ron Paul told us the CIA was behind it. He claimed Bush and Cheney knew about the attack in advance.” That is a quote from ex-Ron Paul staffer and confidant Eric Dondero about Ron Paul. Eric called Paul ”the original 9-11 truther”. 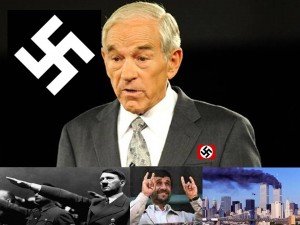 Paul believes, in his “Golden Rule”, that our Islamist enemies are only assaulting us because we assaulted them first.

This makes sense on so many fronts. When Congress was getting ready to vote on a military response in Afghanistan, Ron Paul initially OPPOSED responding to the attack, and expressed no concern about those who died that day. In fact, his only concern was that this attack would be used by the Bush administration to invade Iraq. Paul thinks Osama bin Laden worked for the CIA, and QUOTE: “Hamas was encouraged and really started by Israel.”

They say that ”birds of a feather, flock together”. After Ron Paul was not nominated in the 2008 Republican presidential primary he showed his pettiness by refusing to endorse fellow Republican McCain, saying that ”I couldn’t find anything we agreed on”. He choose instead to support Cynthia McKinney, a race baiting Democrat considered one of the most far left members of congress. McKinney was the elitist who arrogantly struck a white police officer because he ”dared” to ask her for ID. Paul chose to endorse this worthless piece of trash over McCain, why because she is a fellow 9/11 “truther” like him.

Cynthia has been outspoken in her belief that 9-11 was a ”government conspiracy”. And she accused President Bush of ”needlessly murdering the innocent people of New York City so his popularity would rise.” So naturally Paul endorsed her over McCain.

The cult truther movement considers Paul ”one of their own”. In fact, when Paul gave an interview to a conspiracy group called ”We Are Change”, they asked Paul why he didnt come out with ”the truth about 9-11”. Notice that they didn’t ask him ”if he believed 9-11 was an inside job”. Why didn’t they ask that? Beacuse they already knew he is a truther.

Did Paul stand up for America and say during that interview that 9-11 was not a conspiracy perpetrated by the Bush administration to start a war with Muslim countries so that Jewish bankers could get rich? That 9-11 was in fact a cowardly attack by Al-Qaeda on our country? Nope, when they asked Ron the reason he didnt tell everyone ”the truth about 9-11”, Paul actually said that he ”couldn’t handle the controversy because had a full plate and was dealing with other issues”.

Here is the transcript:

Kyley from ‘We Are Change LA’:

Kyley: Okay and one last thing why won’t you come out about the truth about 9/11?

Sounds to me like Ron Paul is a truther but isn’t honest enough to come out and say it directly because he knows it will kill his political career. Or maybe career politician Ron is just acting like a truther to con those morons into supporting him politically. Either way, this corrupt creep belongs in the nut house, not in the white house.

Eric also said that ”Paul is not opposed to foreign aid, he is just opposed to foreign aid to Israel. Whenever you hear Paul talking about cutting foreign aid, he always leads out with Israel.   Egypt and Pakistan actually recieve more aid than Israel does”. ”  Ron wishes the Israeli state did not exist at all. Paul has said this to me on many occasions, Paul is 100% pro Palestinian and believes all of Israel should be surendered to the muslims”.

I asked Gregg Hilton of the RSC(Republican Security Council) for his assessment of Eric’s claims. ”Dondero is right on the money” said Gregg.  Mr. Hilton gave the following examples:

“Paul is a supposedly a foe of all foreign aid, but there is one exception. He naturally supports full funding for his Hamas buddies at the Palestinian Authority.”

On June 20, 2007, Ron Paul and Rep. Dennis Kucinich (D-OH) were the only two lawmakers to vote against the Rothman-Kirk Resolution, which calls on the United Nations to charge Ahmadinejad with violating the genocide convention of the United Nations Charter based on his numerous statements.

Paul has called the Gaza Strip ”a concentration camp” and defended the Palestinians right to make bombs and to recieve weapon shipments to attack Israel with.

On June 19, 2009, the House voted to pass H Res 560 by a 405 to 1 margin. The resolution was entitled: “Expressing support for all Iranian citizens who embrace the values of freedom, human rights, civil liberties, and rule of law, and for other purposes.” Guess which loon was the one negative vote.

He thinks Iran should have nuclear weapons but then says “We need to take out the CIA,” and wants the agency abolished. OK, that combination would give us a nuclear Iran led by a wackjob holocaust denier(Ahmadinejad) and us with no intelligence information on what is happening in the world. And that scenario makes America safer how?????

In Case You Missed It:  In blatant act of executive overreach, Gov. Inslee to mandate covid jabs for all private businesses in Washington
Posted in Freedoms, Terrorism and tagged Election, Ron Paul, Terrorism.

Two interviews with mothers of Martyrs expressing their joy over the Martyrdom of their respective sons, one broadcast on the...