Yemeni President Ali Abdullah Saleh officially left his nation Sunday on his way to the U.S. for medical treatment, The Associated Press reported. 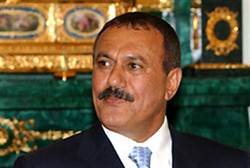 Saleh left the country after passing power to his deputy and asking his people for forgiveness for any “shortcomings” during his 33-year reign, the report said.

After months of diplomatic pressure and mass protests calling for his ouster, Saleh signed a deal in November to transfer power to his vice president in exchange for immunity from prosecution. He continued to exercise power behind the scenes, sparking accusations he sought to scuttle the deal and cling to power.

A spokesman told AP that Saleh left Yemen’s capital Sanaa late Sunday on a plane headed for Oman. He did not say how long Saleh would remain there, but added that he would make “another stop before heading to the United States of America.”

A senior American official told AP Saleh would travel to New York this week, and probably stay in the U.S. until no later than the end of February.

The Obama administration faced a dilemma in deciding whether to let Saleh enter the U.S. after he requested a visa last month. While the administration has long seen getting Saleh out of Yemen as an important step in ensuring the power transfer goes forward, some worried that welcoming him to the U.S. would spark charges from the Arab world that the U.S. was harboring an autocrat responsible for deadly crackdowns on protesters.

To protect against this, the administration has sought assurances that Saleh will not seek to remain in the U.S.

Under the power transfer deal signed in November, Saleh’s Vice President, Abed Rabbo Mansour Hadi, is to be rubber-stamped as the country’s new leader in presidential elections. The political parties that signed the deal agreed not to nominate any other candidates.

AP reported that in a farewell speech which he gave on Friday, Saleh said he was passing his powers to Hadi, whom he promoted to the rank of marshal.

He portrayed himself as a patriot who “gave his life in the service of the nation,” the report said, called for reconciliation and apologized for any mistakes.

“I ask for forgiveness from all sons of the nation, women and men, for any shortcomings during my 33 years in office,” Saleh was quoted as having said.

He also called on Yemen’s youth, who have spearheaded the mass protests calling for his ouster and often faced deadly crackdowns by Saleh’s security forces, to go home.

“I feel for you and call on you to return to your homes and turn a new page with a new leadership,” he said.

Meanwhile, the Al Qaeda terror group has taken advantage of the unrest in Yemen to increase its stronghold in the country.

Last week, Al Qaeda terrorists seized the town of Radda, about 105 miles south of Sana’a. The move further expanded the territory of the terrorist organization, which to a large extent already controls the southern Yemeni province of Abyan.

Saleh warned at the time he stepped down that Al Qaeda was fighting to take over territory.

Two and a half years after U.S. President Barack Obama delivered his "Cairo address," Egypt's parliament chose a top official...