Minister of Public Diplomacy Yuli Edelstein told the World Jewish Congress on Tuesday that it was a misnomer to say Iran has a “nuclear program.” Rather, Edelstein said, Tehran has “a program to destroy Israel.” 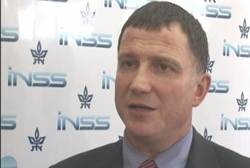 Speaking at the WJC in Brussels to mark International Holocaust Remembrance Day, Edelstein said, “Tehran doesn’t have a nuclear program – it has a program for the destruction of Israel.”

Edelstein said, “The technological advances of today mean that there is no need to have a conference to pronounce a ‘Final Solution’ to exterminate the Jews the way the Nazis did 70 years ago.”

“Today you can just push a button to send a missile to do the job,” he added.

Edelstein took the opportunity to comment on the 2011 report on anti-Semitism released earlier this week, “Every corner of the world is infected with anti-Semitism, even when it has no connection to Jews and Israel.”

“According to some social protesters the global economic crisis was caused by Jews. Arab Spring revolutions blame Jews for the regimes that oppressed them. The ousters of rulers like Qaddafi claimed that his mother was Jewish and that Mubarak was a Mossad agent,” Edelstein said.

“The international community must act to prevent this phenomenon,” he said.

A separate report commissioned by the Bundestag in Berlin found 20% of Germans continued to harbor deeply anti-Semitic views.  Germany, however, was less anti-Semitic than many European countries, including Hungary, Poland, and Portugal.

Prime Minister Binyamin Netanyahu on Tuesday said that even 70 years after the Holocaust much of the world remains silent in the face of continued threats to Israel’s survival.

NBC News reports: The images grow no less shocking with time — a gaping wound on a tiny skull, the...