Kentucky Sen. Rand Paul was blocked from boarding a flight Monday by the Transportation Security Administration in Nashville, Tenn., after refusing a full body pat-down, POLITICO has confirmed. 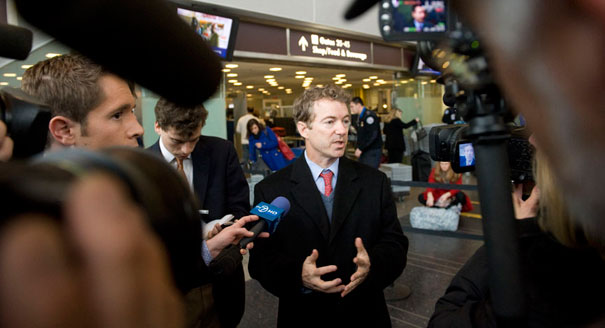 “I spoke with him five minutes ago and he was being detained indefinitely,” Paul spokesperson Moira Bagley said. “The image scan went off; he refused patdown.”

Paul’s father, Rep. Ron Paul (R-Texas), tweeted out news of the incident, saying that there had been an “anomaly” with a body scanner.

The TSA disputed this characterization of the incident.

The Kentucky senator triggered an alarm during routine airport screening and declined to finish the process, said a TSA official, but was “not detained at any point.” A targeted pat-down is usually used to address the alarm.

“Passengers, as in this case, who refuse to comply with security procedures are denied access to the secure gate area. He was escorted out of the screening area by local law enforcement,” the official said.

Shortly before noon, the TSA said Paul had been re-booked on another flight and went through the screening process again without incident.

After he was first stopped, Paul told The AP in a telephone interview that he asked for another scan after setting the scanner off but refused a pat-down, after which he was “detained” at a small cubicle and missed his flight to Washington.

Paul, a Republican, was traveling to Washington, when he was detained. He noted earlier on his Twitter that he was planning to speak at the March for Life.

“Today I’ll speak to the March for Life in DC. A nation cannot long endure w/o respect for the right to Life. Our Liberty depends on it,” tweeted Rand Paul at 9:49 A.M.

The TSA first released a statement to POLITICO without referring to the specific incident.

“When an irregularity is found during the TSA screening process, it must be resolved prior to allowing a passenger to proceed to the secure area of the airport. Passengers who refuse to complete the screening process cannot be granted access to the secure area in order to ensure the safety of others traveling,” said TSA Spokesperson Jonella Culmer.

“The police state in this country is growing out of control. One of the ultimate embodiments of this is the TSA that gropes and grabs our children, our seniors and our loved ones and neighbors with disabilities. The TSA does all of this while doing nothing to keep us safe,” it said.

The incident was first disclosed by the senator’s spokesperson on Twitter.

“Just got a call from @senrandpaul. He’s currently being detained by TSA in Nashville,” read her tweet just minutes later, at 9:59 A.M.

Like his father, Rand Paul has libertarian leanings and has been a fierce critic of TSA’s pat-downs of passengers at airports, which he views as government overreach. The senator grilled TSA Administrator John Pistole last year after a 6-year-old girl from Paul’s hometown, was patted down by airport security.

“I guess this little girl would be part of the random pat-downs, this little girl from Bowling Green, Kentucky, one of my constituents,” Paul said, according to the Lexington Herald-Leader. “They’re still quite unhappy with you guys as well as myself and a lot of other Americans who think you’ve gone overboard, you’re missing the boat on terrorism because you’re doing these invasive searches on six-year-old girls.”

Scott Wong and Burgess Everett contributed to this report.

Newt Gingrich has vowed not to allow future GOP presidential debate moderators to tell the audience not to applaud following...