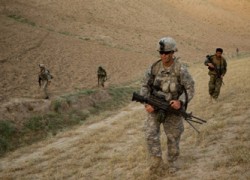 In listening to the State of the Union, you would never know that the U.S. still has close to 100,000 troops fighting the Taliban in Afghanistan. While President Obama highlighted U.S. gains against al-Qaeda and the significance of the raid that eliminated Osama bin Laden last May, he downplayed the challenges that remain in Afghanistan.

President Obama merely said he was “winding down the war,” giving the false impression that the U.S. can depart Afghanistan on an arbitrary timetable without any costs to its national security. This paints a misleading picture of the situation.

President Obama needs to be up front with the American people about the risks of a precipitous withdrawal of U.S. forces from Afghanistan. A hasty troop drawdown could lead to a civil war and the Taliban regaining influence in the country, which would strengthen Islamist militant forces in both Afghanistan and Pakistan and provide the conditions for al-Qaeda to revive in the region.

The military gains made against the Taliban over the last eighteen months are fragile. If President Obama wanted to advance U.S. strategy in Afghanistan, he would have set the stage for slowing down troop withdrawals in order to allow U.S. and NATO commanders to consolidate military gains and to strengthen the U.S. hand in any potential negotiations with the Taliban.

Furthermore, he could have used the opportunity to signal our partners in the region that the U.S. is committed to Afghanistan over the long-term and will not simply turn its back on the region like it did in the late 1980s .

Notably, President Obama did not raise the issue of negotiations with the Taliban. He is probably aware that his administration is on thin ice on this issue. Just a few weeks ago, U.S. media reported that the administration was considering releasing top Taliban commanders from Guantanamo Bay as a concession to the Taliban for opening a political office in Qatar.

Granting such a major concession before the Taliban has renounced al-Qaeda and its terrorist agenda would be a dangerously risky gambit. The fact that the Taliban wants to cut out the Karzai government from the negotiating process should also be a red flag to administration officials. This demand likely reveals the Taliban’s objective of striking a deal with the U.S. that allows them to retake power rather than participate in a normal political process or take part in some kind of power-sharing arrangement.

It seems the President simply wanted to gloss over the war in Afghanistan. But avoiding discussion of a country where thousands of U.S. soldiers are fighting to protect the U.S. homeland is disappointing, especially for a President who emphasized the importance of the same war three years ago.

The Ministry of Defense on Tuesday released photographs of recent tests of Israel's "Arrow 3" anti-ballistic missile system. During the...