25 leaders of Kiryat Arba and Hevron have gotten together to sign a letter of protest following the brutal expulsion of residents of the nearby Mitzpe Avichai outpost two weeks ago. 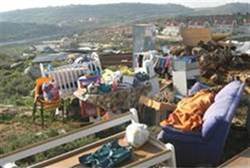 The letter states, “Two weeks ago a serious and shocking incident occurred at Mitzpe Avichai: In the dead of night, in two degree weather, Border Guard and police forces arrived and brutally demolished the homes of the families who lived there. They tore children from their beds and from their mothers’ arms, and evicted them into the freezing night; they then destroyed the houses and the residents’ belongings.”

The letter continues, “To add insult to injury, Arabs who were specially brought in for this purpose took the belongings out of the homes. Unfortunately, this pattern repeats itself also in outposts in other communities.”

“Besides protesting the racist building restrictions imposed on Jews in Israel, we are protesting against the brutal and inhuman action taken against Jewish settlers, including families and children, whose only crime was their desire to settle the vast land of Israel,” the letter says. “The settlement enterprise in Eretz Yisrael has gone through serious incidents and has dealt with difficult challenges; it will overcome, G-d willing, even this difficult and decisive time period.”

The letter was signed by Kiryat Arba’s Rabbi, Rav Dov Lior, who was joined by mayor Malachi Levinger and members of the city council, as well as members of the Jewish community of Hevron.

On Tuesday, Aryeh Davis, who was evicted from his home in Mitzpe Avichai, spoke on Arutz Sheva Radio about the incident with guest show host Shifra Hoffman. Click here to listen to the interview.

In Case You Missed It:  In Case You Were Wondering – It’s Almost Certain Now that Those Were Federal Agents Planted at the “Justice for J6” Rally
Posted in Israel, Terrorism and tagged Freedom, Islam, Israel, Jihad, Judea and Samaria, Military, Muslims, Palestinians, Terrorism.

During his State of the Union speech, President Obama introduced a new plan to save responsible homeowner $3,000 a year...