Former IDF Chief of Staff Gabi Ashkenazi warned, Thursday, that Israel could not afford to cut its defense budget and should prepare itself for war. 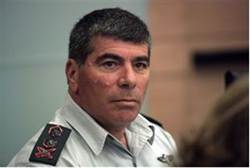 “In comparison to 10 years ago, the possibility of a conflict is not something that we just need to talk about,” Ashkenazi said during a lecture at the Institute for National Security Studies in Tel Aviv.

“We never saw it coming. It happened on my watch, so it must be said. But if it’s any consolation, Egypt never saw it coming either,” Ashkenazi said of the so-called Arab Spring protests that have no turned into an Islamic winter in elections throughout the Arab world.

“The Middle East’s plates are shifting. What the Egyptian army didn’t know, I couldn’t have known. (Egypt’s) leaders did not know either,” he said, adding the ultimate strategic picture was still changing.

“In my opinion, the strategy vis-à-vis Iran should be to do whatever is possible under the radar coupled with painful and crippling sanctions. However, we should also keep a viable military option on the table,” he said.

While Ashkenazi said sanctions were having an effect on Iran, he warned that time was running out since the Iranian nuclear program was moving forward at a rapid pace.

“Our mission now needs to be to slow down the clock and to speed up the clock of sanctions and hope that it works,” he said.

Ashkenazi cautioned that Iran’s strategic acumen should not be overestimated, saying Tehran had made some strategic blunders and was threatening to make others as pressure mounts.

“I believe Iran would be making a strategic mistake if it blocks the Strait of Hormuz. Another mistake was trying to kill the Saudi ambassador at a restaurant in the US capital. The Iranians are liable to make more mistakes under pressure,” he said.

Ashkenazi served as IDF chief of staff from 2007 until 2011 and certainly played a key role in preparing the military for a possible attack against Iran’s nuclear facilities. A 2007 strike against Syria’s nuclear reactor widely ascribed to Israel also happened on his watch.

Ashkenazi, who oversaw operation Cast Lead in 2008-2009, said the new regime in Cairo made a new Gaza incursion a “complex” undertaking.

“The possibility of conducting another extensive operation in Gaza has become more complex following the events of the past year in Egypt and the change of government in that country,” he said.

“I think that this government will not act like Mubarak. I do not think he was a Zionist, but you cannot ignore the fact that he was an anchor of stability in the region considering the not-so simple tests he passed – the wars in Lebanon or the intifada.”

The head of the National Union, MK Yaakov Katz (Ketzaleh), launched a counterattack against politicians who he says want to...