The head of the National Union, MK Yaakov Katz (Ketzaleh), launched a counterattack against politicians who he says want to push religious men out of the IDF, and replace them with women. MK Katz presented the Knesset with recent research conducted by the IDF with the U.S. military that shows women in combat units have much higher rates of injury and suffer much more serious injuries than men. 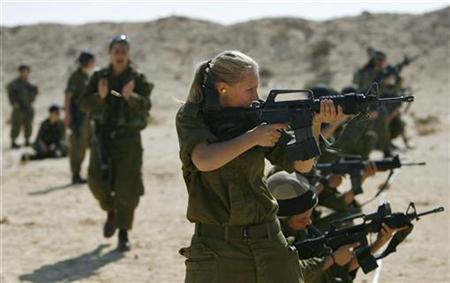 “A study conducted by the Chief Medical Officer in July 2011 together with the U.S. military showed that women who undergo the same things that men undergo in artillery units, in Karakal and the antiaircraft array are physically hurt four times more than the men, and the seriousness of their injuries is 4 to 10 times greater,” said Katz.

Turning to female MKs Einat Wilf (Independence) and Orit Zuaretz (Kadima), who were seated in the plenum, he said: “The Holy One made us men and made women. I want to give birth and I can’t… So I say – women give birth, and men – G-d made us different. He gave the woman a womb, he gave us strong arms, each one has a different role and we are built differently. Along comes this study and shows that women suffer four times the injuries. And where are the injuries? Uterine prolapse. They cannot give birth afterward. Ruptured discs. Stress fractures. This is what needs to be answered. We took our women, who are gentle, and modest and kind, and we decided to turn them into men. I am telling you, MK Wilf and anyone who is listening to me including the Chief of Staff – it is not possible, MK Zuaretz, to turn a woman into a man. Impossible!”

MK Katz hinted that the military is trying to cover up the added danger that women are exposed to in the combat units. “When a woman is hurt this way, when she is discharged from the army – she is unable to obtain [her medical] files,” he said. “You should look into this. Why is it that a woman who is discharged from the army because of one of these things – the files suddenly disappear?”

Ketzaleh, who served in an elite IDF unit and was badly injured in the Yom Kippur War, summed up his emotional speech by saying: “And I am telling Major General Barbivai and the Chief of Staff, an effort must be made — with care and love – to take the men of Israel, who are hareidi and religious, and put them in the army and not to try and replace them with women.”

Approximately 3,000 fascists, including Marienne LePen, “celebrated” Holocaust day at an annual dance while the United Nations remembered its horrors....