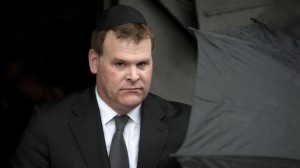 “Israel has no greater friend in the world than Canada,” Baird said at the Yad Vashem Holocaust Memorial on Monday.

Baird also said: “Canada does not stand behind Israel; Canada stands shoulder to shoulder with Israel,” which he repeated during a meeting with President Shimon Peres.

After his meeting with Peres, Baird told reporters, “whether it is rockets raining down on Israeli schools, or the constant barrage of rhetorical demonization, double standards and delegitimization, Israel is under attack.”

Baird and Finance Minister Jim Flaherty are slated to spend several days meeting with their counterparts in Israel and with leaders of the Palestinian Authority.

On Monday, the duo met with PA chairman Mahmoud Abbas, Prime Minister Salam Fayyad and other senior officials in Ramallah. During the meeting Baird expressed Canada’s position that the unilateral PA statehood bid at the UN was “profoundly wrong.”

When it comes to the Middle East, the former president never ceases to amaze. In an interview published in Time,...