The dispute between the European Union and Hungary escalated temporarily when the European commission said it planned to bring suit against Hungary. The Commission generally sues member states on economic issues, such as a government restraining competition or subsidizing national champions. 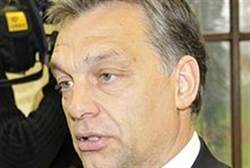 The Hungarian issue involves laws that go to the heart of governing party Fidesz’ political program. One controversial law will reduce the retirement age for judges from 70 to 62 and another law weakens the president of the Hungarian Central Bank.

The law on the judiciary would allow the Hungarian government to pack the court with new appointees subservient to the government.

The law on the bank allows the Hungarian parliament, where the government of Viktor Orban commands more than a two-thirds majority, to nominate members of the Monetary Council – as well as allowing a government minister to sit on that body.  The Monetary Council sets interest rates for the country, something that is normally the prerogative of the central bank governor.

Orban flew to Strasbourg, home of the European Parliament, in an attempt to placate the deputies who had called for suspending voting rights for Hungary. Hungary, already in financial straits, could also be fined if the European Court found in favor of the commission.

At the parliament in Strasburg, only the European People’s Party (EPP), allied with the Christian-Democratic group, defended the Fidesz government. The EPP noted that Hungary was the only ex-communist country that had up to now failed to revise its communist constitution. It urged an amicable resolution of tension with the Commission.

The European Liberals complained that the commission, while correct, was mistaken in focusing on technical and economic issues and ignoring the basic erosion of democracy in Hungary. This view was shared by the Socialists and the Greens, who assailed the Orban government for constricting the freedom of the press and the independence of the judiciary, while seeking to erode political pluralism.

Some feared that Prime Minister Orban,  who had promised that his government would not be dictated to by international leftists, would choose to escalate the issue . However, Orban chose to fold and wrote the Chairman of the Commission, Jose Manuel Barroso, that his government would work to modify the controversial legislation. In response, the Commission promised to help find a legal solution to resolve the matter.

Hungary needs the European Union to refinance nearly €5 billion of debt – giving the Commission leverage over Budapest. On the other hand. given the debt crisis. the Commission undoubtedly considers Hungary to be an unnecessary distraction from more important issues.

Obama Administration Knifes Britain in the Back over Falklands

In yet another display of disdain for the Anglo-American Special Relationship, the Obama administration has weighed in on the mounting...