When it comes to the Middle East, the former president never ceases to amaze. 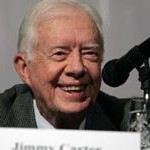 In an interview published in Time, he was asked: “What do you think it means that Iran seems to have its first nuclear fuel rod?”

His complete answer: “Well, of course, the religious leaders of Iran have sworn on their word of honor that they’re not going to manufacture nuclear weapons. If they are lying, then I don’t see that as a major catastrophe because they’ll only have one or two military weapons. Israel probably has 300 or so.”

There you have it. In 51 words, Carter demonstrates convincingly why he should stay out of the business of Iran analysis.

Not that he was much better at it while in the White House.

Remember his famous expression of confidence in the Shah — “an island of stability” — when one year later the Iranian leader was ousted and had to flee the country?

And the catastrophic U.S. attempt, under Carter, to free the 52 American hostages taken by the Shah’s successors, that failed for the lack of a working helicopter?

And the fact that those hostages languished in Iranian hands for 444 days, only to be released the very first day Carter’s successor, Ronald Reagan, took office?

Carter did not understand Iran then. Judging by the Time interview, he still doesn’t.

First, how could any serious observer begin a response by mentioning that “the religious leaders of Iran have sworn on their word of honor that they’re not going to manufacture nuclear weapons”?

Of what possible relevance is such a comment, other than to suggest that Carter may actually give it credence?

A regime that has been found to lie about everything else — its leaders claimed there were no nuclear enrichment facilities, that there were no homosexuals in the country, that its women were the freest in the world, that the Holocaust never took place, and that its 2009 elections were transparent — is actually given the benefit of the doubt by the former president.

He begins the next sentence with the phrase, “If they are lying.”

Again, he himself isn’t sure.

Perhaps he thinks, in contradistinction to the International Atomic Energy Agency, UN Security Council, Obama administration, European and Gulf leaders, and Israel, that all the Iranian leaders really want is peaceful nuclear energy, nothing more.

And then comes the clincher. Even if the Iranians by some chance are lying, he said, “then I don’t see that as a major catastrophe because they’ll only have one or two military weapons.”

How could anyone possibly know how many bombs Iran might build, if left unchecked? This year, it might be one or two; next year, ten or twenty; and so on.

Second, at the end of the day, the real issue is not how many bombs Iran would have, but the very fact that it possessed the weapon.

That would change everything in its relations with its neighbors and beyond.

Iran would derive incalculable power and confidence from the mere fact that it crossed the line. Going forward, all other countries would have to factor the nuclear element into their dealings with Tehran — and, it should be added, with such allies as Syria, and such non-governmental partners as Hamas and Hezbollah.

Third, one of the most ominous changes could well be a new arms race in the region, already the most volatile in the world.

What countries might, in response, move towards nuclear-weapons programs of their own, driven by fear (think Saudi Arabia) or “prestige” (think Turkey)?

Then the risk of catastrophe by design, miscalculation, or accident goes up exponentially.

So, too, does the chance of a further spread of the weapons. Remember A.Q. Khan, the Pakistani scientist who ran the Walmart of nuclear-weapons technology?

Impossible to conceive of Venezuelan President Hugo Chavez seeking nuclear help from his Iranian friends to achieve the same position in Latin America that Iran aspires to in its neighborhood? Not in my book.

Fourth, Carter should go back and read the words of Hashemi Rafsanjani, the former Iranian president, who said: “[T]he use of even one nuclear bomb inside Israel would destroy everything.”

For Carter to imply that Israel is safe and secure from Iranian nuclear designs by dint of having more bombs is, well, naïve, all the more when Iran’s defining eschatology is added to the picture. If religious fervor should trump rational behavior in Tehran, all bets are off.

And finally, Carter once again displays his misreading of Israel, something he has regrettably made a habit of in recent years and also, incidentally, on vivid display in the same Time interview.

Israel still lives with the shadow of the Holocaust. How could it not?

A leader set forth a plan to establish a 1,000-year Reich and destroy the Jewish people. Few took him seriously. Indeed, there were those at the time — all titled, confident and credentialed — who sounded very much like Carter in his assessment of present-day Iran.

They were dead wrong, and the world paid a horrific price for failing to grasp Hitler’s intentions earlier.

Of one thing we can be certain: Israel will not place its trust in Carter’s reading of Iran. Nor should anyone else.

QUOTE: When Jimmy Carter told his family of his intention to run for President, his mother asked, “President of what?”