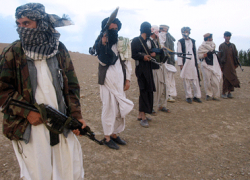 In a secret NATO report recently leaked to the British media, Taliban insurgents told their interrogators that they are increasingly confident that the Taliban will retake power once NATO forces depart Afghanistan, and that Pakistan is positioning itself for such an outcome. NATO officials have sought to downplay the report’s contents, emphasizing that it represents uncorroborated pieces of information, not an overall analysis of the military situation.

Still, the contents of the report should give pause to those who are pushing for a negotiated settlement with the Taliban. There are well-founded concerns that the Taliban are uninterested in genuine peace talks and will try to string the U.S. along in talks that would simply allow them to play for time and obtain release of their prisoners. The U.S. must guard against the possibility that the Taliban will use any negotiations to strengthen their influence in Afghanistan without breaking ties to international terrorist groups or giving up their goal of establishing an Islamic caliphate.

The leaked NATO report, based on thousands of interrogations of captured insurgents, also asserts that Pakistan supports and directs their attacks against NATO forces and is “intimately” involved in efforts to topple the Karzai government. Pakistani Foreign Minister Hina Rabbani Khar dismissed the report as “old wine in an even older bottle,” and said it was more important “to look at the conversations that are taking place with the Taliban by many other important capitals of the world.” Although Pakistan claims it is not interfering in Afghanistan’s affairs, there have been no indications that Pakistan has cracked down on Taliban sanctuaries on its side of the border.

The NATO report, combined with findings from a recent intelligence estimate on Afghanistan that conclude the Taliban have little interest in peace talks, should cause the Administration to think twice when considering concessions to the Taliban. These reports reveal that the situation is not yet ripe for genuine reconciliation, and the Administration would be jumping the gun if it releases senior Taliban prisoners at this juncture. U.S. intelligence officials acknowledged in congressional hearings yesterday that the U.S. may release five top Taliban prisoners from Guantanamo Bay as an incentive to bring the Taliban leadership to talks.

The building blocks for genuine peace and stability in Afghanistan are simply not yet in place. The Administration must pay more attention to the facts on the ground before diving into a pseudo-reconciliation process merely to justify an early drawdown of troops.

Qu’ran: The World’s Most Dangerous Book

The September 11th attackers based their actions in complete detail on verses from this book. Since 9/11 alone, there have...