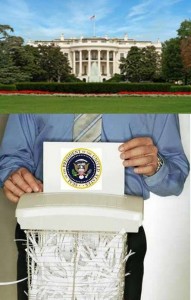 The dispute is expected to be a prime topic at a hearing Thursday, when Attorney General Eric Holder testifies before a panel whose chairman, Rep. Darrell Issa, R-Calif., alleges the Justice Department is engaging in a cover-up.

Issa, chairman of the House Oversight and Government Reform Committee, has threatened to seek a contempt of Congress ruling against Holder for failing to turn over congressionally subpoenaed documents created after problems with Fast and Furious came to light.

The attorney general “will be asked to explain his decision to withhold from the people this factual evidence from investigators,” Issa said before the hearing.

On Wednesday, Deputy Attorney General James Cole said the department will provide material created after Feb. 4, 2011, the day the Obama Administration gave incorrect and misleading information to Congress about Fast and Furious.

Cole said the department had made an exception to longstanding policy in order to provide material on how the erroneous Feb. 4 letter was created, but other documents about the congressional inquiries on Fast and Furious would not be turned over.

A committee spokesman, Frederick Hill, said the administration is under investigation for Fast and Furious but also for its response to trying to silence whistle-blowers and investigators who expressed concern about the operation.

“If the Justice Department cannot provide assurances that it will meet its legal obligations” and provide the documents, “the committee has no other option than moving to hold Attorney General Holder in contempt,” Hill said.

In a Feb. 4, 2011, letter to Congress, the department said federal agents made every effort to intercept illegally purchased weapons. Instead, agents in the Phoenix-based Fast and Furious investigation employed a risky strategy called “gun-walking” in an effort to track the weapons after purchase. The purpose was to make cases against gun-smuggling ring leaders who had long escaped prosecution.

“Allowing guns to ‘walk’ — whether in this administration or in the prior one — is wholly unacceptable,” Holder stated. “This tactic of not interdicting weapons, despite having the ability and legal authority to do so, appears to have been adopted in a misguided effort to stem the alarming number of illegal firearms that are trafficked each year from the United States to Mexico.”

Fast and Furious was one of at least four gun-smuggling probes that involved gun-walking, all undertaken by the Phoenix division of the Bureau of Alcohol, Tobacco, Firearms and Explosives. Three of the gun-walking investigations began under President George W. Bush, one under President Barack Obama. The first started in 2006.

In Fast and Furious, the federal agency lost track of almost 1,400 of the more than 2,000 weapons whose purchase attracted the suspicion of the Fast and Furious investigators. Some 700 guns connected to suspects in the operation have been recovered in Mexico and the U.S., some of them at crime scenes, including the scene near Nogales, Ariz., where border agent Brian Terry was murdered in December 2010. A month after Terry’s death, Congress began hearing of problems with the probe.

Issa’s allegation of a cover-up was fueled by documents turned over Friday by the Justice Department that contained new information about the events of early February 2011.

Two days before Justice told Congress that federal agents made every effort to intercept illegally purchased weapons, the department’s criminal division chief, Lanny Breuer, suggested letting some “straw,” or illicit, weapons buyers in the U.S. transport their guns across the Mexican border so Mexican law enforcement could arrest them there.

According to emails turned over to the committee, Breuer made the suggestion to Mexican officials because it “may send a strong message to arms traffickers” because Mexican laws contain far stiffer penalties against straw gun buyers than U.S. laws do.

Cole said Breuer’s suggestion, which was not implemented, would have been less risky than the earlier investigations because he intended for Mexican agents to arrest the smugglers at the border rather than let the guns loose in Mexico.

For Now, Government Still Lets You Pick Your Own Roommate

The people of the United States ordained a Constitution of limited government.  As time passes, the people have more of...