In May 2010, New York City Mayor Michael Bloomberg posited that the individual who packed a Nissan Pathfinder full of explosives and parked it in Times Square was likely a homegrown American “with a political agenda who doesn’t like the health care bill or something.”

Fortunately, the car bomb did not detonate.

The terrorist turned out to be Faisal Shahzad, a Pakistan-born U.S. citizen. And, not surprisingly, Shahzad wasn’t upset about the health care bill. After pleading guilty in court he said, “I consider myself a Mujahid, a Muslim-soldier.” He was upset, as he put it, over “American occupation of Muslim Lands.”

Shortly after the attack, Bloomberg prematurely asserted that there was no evidence suggesting the bomber was part of any recognized terror network. Shahzad later told the court he trained with thePakistani Taliban to learn bomb-making and other related skills.

Could it be that Bloomberg has underestimated the threat of Islamist terror, or is there another agenda?

The issue has again become relevant in recent days. The New York Times ran a series of articles and editorials blaming the NYPD for using the film The Third Jihad: Radical Islam’s Vision for America as part of their counter-terrorism training.

The articles calling the film “a Dark Film on U.S. Muslims” and a “Hateful Film” are riddled with inaccuracies and omissions.

Following publication of the articles, Mayor Bloomberg stated that NYPD used “terrible judgment” in showing the film, despite admitting that he had never seen it. 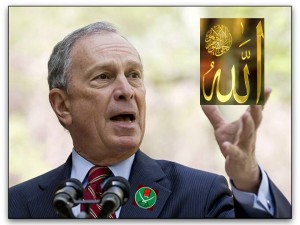 We were not aware that the NYPD was using the film, but when we learned of it some months ago, we were pleased that the officers would have an opportunity to learn about the indoctrination taking place in certain segments of Muslim society in America. The film reveals what viewers are unlikely to see on the evening news: What terrorists, radical preachers and Islamists are saying in their own words, in their own mosques and media, to their followers.

The film exposes how radicals employ the dual strategies of “violent Jihad,” along with a “cultural Jihad,” through which Islamist groups use coercion and non-violent means to gradually expand their influence over Western society.

Now, Mayor Bloomberg, The New York Times and others want to bar law enforcement officers from seeing the film. The question is, why?

We reject, outright, the charge that our film is anti-Muslim or that it casts a shadow over the entire Muslim community. In fact, we go to great lengths throughout the film to differentiate the radical Islamists from peaceful Muslims. The film is narrated by, Dr. Zuhdi Jasser, a devout Muslim-American, who has dedicated his life to exposing the threat of radical Islam.

Our critics have failed to mention these points and have chosen not to challenge the film on the merits of its thesis or content.

CAIR (Council on American Islamic Relations) is one of many Muslim interest groups that purport to represent the Islamic community in America but in reality have well established ties to Hamas and other terror groups.

CAIR was designated by the U.S. Justice Department for its role in terror financing during the nation’s largest-ever trial on the subject. As a result, the FBI has officially severed all ties with the “advocacy organization.”

Outside of its support for terror organizations, CAIR works to quickly and effectively to silence any discussions about radical Islam by playing the racism card and accusing critics of Islamophobia. CAIR’s devices are effective.

As soon as the current story broke, CAIR immediately branded the film “anti-Muslim propaganda” in a press release. This was followed by a CAIR-led protest on the steps of City Hall calling for the resignation of the NYPD Commissioner Ray Kelly.

The entire episode could have been a chapter in The Third Jihad. We are now seeing “cultural Jihad” in action. In order to avoid agitating Muslim constituents, Mayor Bloomberg  and Commissioner Kelly are backing away from the film, regardless of its merits.

The net result is that CAIR, a designated Muslim interest group with ties to terror financing, is now telling the NYPD how it should go about fighting terror. If that’s not the ultimate act of subversion, I don’t know what is.

Iran Missile Could hit US, Warns U.S of ‘Coming Event’

North America is on high alert, according to an internal security document obtained by ABC News that predicted the threat...