The hopes for moderation and real democracy in Egypt is limited; neither the Islamists nor many alleged moderates are moderate. 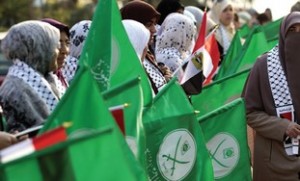 Here are the two main causes of error:

• They think the Middle East is just like the West, so they can extrapolate from their own experience.

When someone would say, “If I were Yasser Arafat, I’d… ,” my response would be: stop right there. I must run out to the corner store and get a pack of cigarettes.

I have never smoked a cigarette. And I kept on running.

You are not Arafat or Khomeini or Saddam Hussein or whatever, and unless you have some understanding of how they actually think – and not your own Western idea of what they should think – there’s no sense in discussing it.

• They think the Middle East is just what they’d like it to be. Peace? Easy. They have a plan. My response: I’d love to hear your plan but I’m all booked up to hear Middle East peace plans for the next three years.

I’ll put you on the waiting list and get back to you.

By the same token, they sometimes lie to make things seem better. You can’t criticize the Palestinian Authority – or the Muslim Brotherhood, Hamas, Hezbollah, the Turkish regime, etc. – even by telling the truth about them, because that would damage the cause of “peace.” They don’t understand that not telling the truth is the best way to undermine any chance for peace, or any understanding of why there is no peace.

THE MIDDLE East is so strange in Western terms, so different, that unless you are really aware of those differences, please pick something else to be an expert on.

And that brings me to a case in point that I have before me right now.

The Wafd is a “liberal,” “moderate” Egyptian party, right? It is the biggest non-Islamist party in Egypt’s parliament with 7.6 percent (pretty pitiful, huh?) of the seats. So if you are a Western reporter, policymaker, or “expert” you would say that it is one of the great hopes – perhaps the greatest – for moderate, liberal Egyptian democracy, right? And the same people, of course, explain that revolutionary Islamism isn’t really a threat because they are really just all greedy people who’d rather have US aid than Allah.

But how many “liberal,” “moderate” parties have had:

• A deadly shoot-out between two factions over control of their headquarters?

• An alliance with the Muslim Brotherhood – which might be renewed

• A deputy leader who explains that September 11 was a US-Zionist plot; the Holocaust never happened; and Anne Frank was a phony?

• And now this article, courtesy of the party’s official newspaper, appearing on January 27, 2012.

Thanks to MEMRI for catching and translating it.

You can read the whole thing for yourself if you want, but briefly the article charges that a small US Navy Medical Research Unit in Cairo that conducts research on tropical and Third World diseases is in fact engaged in plotting to send: “Medicines, pesticides, food products and seeds [to Egypt], after these have been dangerously tampered with so as to harm the Egyptians’ health” and handling “biological weapons which, if deployed, could exterminate the entire Egyptian nation, or any other nation…. They can also manipulate these Egyptian genes, alter their traits, and deform them by means of American medicines or vaccines that are sold dirt cheap to the poor Egyptian people, along with crop seeds and food products….”

It goes on to suggest that various disease epidemics in Egypt were caused by the United States and charges that the US installation “sees the Egyptian children as an opportunity to test new medicines,” turning the country’s children into lab rats and causing increases “in infertility, mental retardation and disability among Egyptians born in recent years… as well as [instances of] impotence.”

And all this is done “in accordance with America’s will, which has Israel standing forcefully behind it” to develop biological weapons for Israel against Egypt.

This one article is a rich source of knowledge about Egypt and the Arabic-speaking world, not so much in terms of health issues but in terms of political and intellectual structures. Of course, there are the common conspiracy theories and the idea that the Zionists are everywhere, but that’s only the beginning of the issue. Don’t be fooled into thinking that conspiracy theories are silly, funny, archaic ideas that don’t mean anything precisely because they are inaccurate.

Here are some of the implications:

• The priority for the nation is to fight foreign conspiracies, not to fix domestic shortcomings

• Since internal problems are blamed on outsiders they are thus made impossible to solve. Science and modernity are viewed not as solutions but with suspicion, as attempts to destroy one’s own society through imperialist takeover, social transformation, and atheism (or Christianity imposed on Islam)

• If Americans are so evil then it makes sense for people to become terrorists and to slay or drive out the horrible villains. Isn’t it reasonable to slay Americans in revenge or in self-defense? Now important Egyptians are also claiming that US embassy officials are running over Egyptians with their cars(apparently US embassy vehicles were stolen by criminals).

Together these four symptoms block progress, inflame hatred and extremism and produce conflict.

This is a common pattern in the Middle East whether aimed against Israel, the United States, or the West in general.

And guess what? Except for the last sentence of the third aspect, these are also the talking points of hegemonic Western leftism. It’s all there: the West is evil and wants to dominate; underdevelopment is not the result of traditional society and thinking but Western threat and conspiracy; fighting the West from outside and weakening it from inside are justified.

So, in short, the Islamists are not “moderate,” and many of the alleged moderates are not moderate.

Hence, the hopes for moderation and real democracy is limited by the small numbers of those who hold them. We were told not so long ago that the young, social-media using kids who made Egypt’s revolution would dominate the country thereafter.

Question: What percentage of the vote in parliamentary elections did the young, social-media using kids who made Egypt’s revolution get? Answer: 1.3 percent.

The writer is director of the Global Research and International Affairs (GLORIA) and a featured columnist at Pajamas Media. His new book, Israel: An Introduction, will be published byYale University Press in January.

In Case You Missed It:  Proof that the Taliban takeover was not Biden's incompetence But TREASON!
Posted in Terrorism and tagged Islam, Muslim Brotherhood, Muslims, Terrorism.

Abu Musab al-Suri had been held in Syria for six years after being captured by the CIA in 2005 and...