Former Egyptian leader Mubarak kept the Muslim Brotherhood at bay before Obama pressured him to step down. That was more important for the world than lauding the”democratic” revolution in Tahrir Square, which anyone who understands the area realized would soon give way to Islamic dominance,  and it has! 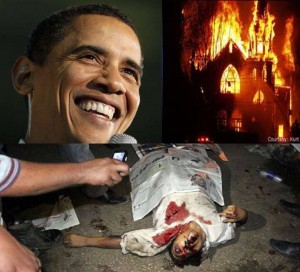 President Obama delivered his Egyptian version of hope and “change” in a speech at the Cairo University in June 2009, members of the then outlawed Muslim Brotherhood were attendance upon the president’s insistence.  Egypt’s President Mubarak did not show up. ‘Change’ was already in the air.

The Obama administration  supported the revolution that is rapidly moving Egypt in the direction of radicalized Islam, Obama pressured  Mubarak to step down and ceded power to the radicals.

Decades of Arab rule under Gamal Abdel Nasser Nasser, Anwar Sadat, and then 31 years under Hosni Mubarak had not been kind to the Muslim Brotherhood in Egypt which was viewed as a threat. They were repressed and forced onto the sidelines, waiting for future opportunities to re-enter Egypt’s political arena.

Now, under the guise of an Arab spring, the Islamic revolution in Egypt has commenced. The Muslim Brotherhood saw its chance. The young Face book and Twitter generation from Tahrir Square who spread the news of the anti- Mubarak demonstrations, are now only bystanders.

The recent Egyptian elections in January have given the Muslim Brotherhood 47% of the Parliament, and the radical Islamist Salafi Party 25%. That’s an overwhelming 72%. A slam dunk!

America has its Founding Fathers and mentors; Patrick Henry, Thomas Paine, Thomas Jefferson, George Washington, John Adams, Benjamin Franklin, who spoke of liberty, equality, and risked all in the fight for independence.

The founder of the Muslim Brotherhood, Hassan Al Banna,  over eighty-years ago stressed the ideal of world revolution to establish the dominance of Islam and Sharia law (Islamic Law). According to Al-Banna, Islam “invades the Western heartland to overcome it until the world shouts the name of the prophet.”

It is now becoming a little more worrisome to the bleary eyed Western media, enthusiastically swept off their feet by initial euphoria; they are beginning to fathom that the results they envisioned might be somewhat elusive. There are few reports these days about the ‘dawning of freedom’. Now, it’s a more subdued, stories of rape, or Christian persecution, a Church bombing, even the refusal to allow American citizens to leave Egypt. Its a‘wait and see’ attitude as reports of rioting, murder, as well as the re-establishment of ties with Iran after 31 years follow one another.

Israeli leaders were stunned that the American President actually abandoned Hosni Mubarak, a longtime US ally, as they contemplated the consequences. Egypt and Israel had a 30 year peace agreement that they both respected, from the now past tense peace accords to the now chants of death to Israel today from the new Egyptian rulers,  that peace has seem to have rapidly faded away under the guise of Islamic radicalism.

When the uprising was in full swing,  Obama  jubilantly praised the Tahrir Square demonstrators as a model of non-violence (he didn’t ask Lara Logan) and a moral force, proclaiming that they are an “inspiration to people around the world. Obama also stated that Egypt will never be the same. He was right about that, at least.

In effect, the Obama administration has directly supported the radicalization of Egypt.  It is now trying to contain the debacle it helped create. But one and a half billion dollars in aid will not in the long term influence a nation whose agenda and ideology is vastly different. The Obama Administration’s attempts to have impact will ultimately be resented as outside Western influence.

Will there be human rights? The recent wave of persecution of the Coptic Christians of Egypt has been appalling, terrifying a community of eight million. Egyptian government vehicles were seen plowing through Christian protesters  the growing persecution, even Egyptian government vans mowing  down Christians  as bodies flew out the sides and landed lifelessly in the blood stained streets of Cairo

Will there be an increase in woman’s rights? Female representation in the new parliament is a miniscule two percent, in total, ten deputies. Islam has a history of treating woman inferior to man, Sharia law says a womans word is only worth half that of a man, that is Islamic law.

Will Egypt continue to honor the 1979 Camp David Accords? Its new Islamic leaders have called for their abrogation several times and have rejected the suggestion of dialogue with the Israeli Government, while describing the Jewish State in very derisive terms.

Has the Egyptian junta responded to the US and its financial and political backing? The decision to bar exit to Americans working for human rights NGOs, which include the son of a member of the Obama Administration, would indicate otherwise.

An NGO human rights monitoring organization is a touchy issue to a regime in which the abuse of civilians is on the increase.

From Yemen to Libya, and others will follow Egypt’s example of this radicalization which is completely supported and assisted by President Barack Hussein Obama.

Former Egyptian president Hosni Mubarak stated, when he stepped down after pressure from Obama, that “history will judge me.” History will also judge President Obama. Hosni Mubarak tried to warn Obama, but Obama refused to listen.  In ten years how will this radicalization of the Middle East effect the rest of the world, what are the next effect.  What will happen to non-Muslims as persecution, murders and other atrocities are now on the rise, all thanks to Barack Hussein Obama.. Allah Akbar Mr President..