The Ministry of Defense announced on Friday that it conducted a successful test on the “Arrow” anti-missile system. The experiment tested the system’s enhanced capabilities of dealing with ballistic missiles such as the Scud and the Iranian Shihab. 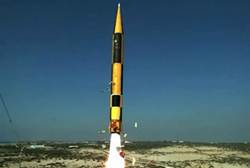 As part of the test, an F-15 Israel Air Force fighter jet launched a Blue Sparrow, a missile developed by Rafael, to impersonate long-range Iranian ballistic missiles. The Arrow system was able to identify the missile and home in on it.

Defense Minister Ehud Barak congratulated all those who took part in the successful test, which was performed this morning as part of a multi-year program between Israel and the U.S. Missile Defense Agency.

“This technological achievement is an important step in Israel’s progress in multi-tiered protection and in the development of the Block 4 stage of the Arrow system,” Barak said. “The successful test demonstrates once again the high technological capability of the engineers, technicians and employees of the Israeli defense industries who participated in the experiment.”

The Arrow 3 system is an upgrade of the Arrow 2 defense system that has been in development with the United States since the 1980s, designed to intercept long-range missiles. The improved Arrow 3 system is cheaper than its Arrow 2 counterpart.

The Arrow 3 system is said to have similar capabilities as those interception systems present on U.S. Aegis destroyers, being able to intercept missiles at great altitudes and distances.

Last week it was reported that Israel and the United States have teamed up to export the Arrow anti-missile system to South Korea for $1 billion. Israel denied the report.

At a time that the United States is trying to squeeze Iran and isolate her, Pakistan is doing the opposite....