The Greek Parliament was ringed by firebombs, and a venerable movie theater was left a blackened shell. The Greek Prime Minister Lucas Papdemos appealed to the parliamentarians to vote for the severe austerity measures including a 22 percent cut in the minimum wage, an axe to pensions and firings in the civil service. 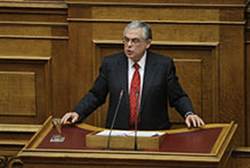 He warned the parliamentarians that if Greece defaulted, they could face collapse and anarchy, and warned, “We are just a breath away from Ground Zero.”

Snap elections are now set for April after the major party leaders signed off on the austerity plan to satisfy creditors and would-be financial rescuers. According to economists at Citigroup, the crisis has not been averted, but it has simply been deferred. They think there is a 50 percent chance that Greece will exit the euro in the next year and a half.

The logic behind their predictions is solid. The formulation of the austerity plan, which has still not induced Germany and other would-be lenders to step in, has left a great deal of bad blood. The Greeks felt that the terms imposed primarily by Germany, the major paymaster in the deal, were too onerous and even brought back memories of the German occupation during the Second World War. The Germans bridle at seeing themselves referred to as Nazis in the posters brandished by the Greek protesters.

Even after the Greek Parliament approved the austerity plan, high-ranking Germans such as finance minister Wolfgang Schauble declared that they would no longer be satisfied with mere promises and the Greek crisis could not be a bottomless pit. The minister told the Greeks that it was up to them: “That it is all in the hands of the Greeks themselves. But even in the event, which almost no one assumes will happen, they will still remain part of Europe.”

The Germans still believe in their proposal that was shot down in the European Union of installing a financial caretaker until Greece achieves solvency. A Bundestag deputy Hans Michelbach of Chancellor Angela Merkel’s sister party the Bavarian CSU opines, “Even the best agreements are no use without an efficient administration.”

The problem is that austerity may prevent the debt hole from getting deeper, but only an expanding economy will help pay off debts. The Germans want the Greeks to be competitive, but with the European markets contracting and consumers cutting spending, even if Greece could miraculously build new factories and offer goods at competitive prices, who is supposed to buy them?

If the Germans are fed up with financing the Greeks, the Greeks are also resistant to undergoing endless economic privation with little to show for it.

The Palestinian Authority wants UNESCO to declare the Patriarchs’ Cave and Rachel’s Tomb as its heritage sites while Israel is...