The five candidates in today’s primary were all deferential to each other, promising to support the winner in an attempt to oust a hated president. 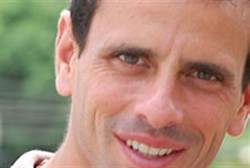 If you’ve gotten this far, you will have realized that we are not talking about the Republican Party, but rather the Venezuelan opposition that went to vote today to select the candidate that will run against Hugo Chavez in October. The opposition’s determination to stage a united front gives them their best chance to unseat Chavez, who came to power 13 years ago.

For Chavez, all the candidates are one and the same stooges of the ‘Empire’ – namely the United States. However, even if the candidates share a similar objective, their approach is different.

The two major contenders for the opposition leadership are both state governors. One is Henerique Capriles, the 39-year-old bachelor governor of Miranda that includes a chunk of the capital Caracas. Once jailed and then acquitted during the rule of Chavez, Capriles is attempting to combat Chavez and his Venezuelan Socialist party by tacking to a center-left platform and holding up as his model, former Brazilian President Luiz Inacio Lula da Silva. Da Silva managed to keep both the poor and the businessmen happy in Brazil and helped spearhead that country’s takeoff. He avoids attacking Chavez directly, reserving most of his barbs for the president’s PSUV party.

His closest rival for the nomination is Pablo Perez, governor of the western state of Zulia whose population is 4 million and which includes the country’s second-largest city Maracaibo. If Capriles relies on charisma, Perez relies on the old Democratic Action party machine that dominated the country’s politics before the rise of Chavez, as well as his own New Era Party. He is banking on a law and order approach to tap into discontent with Venezuela’s spiraling crime rate, as well as the Colombian guerrillas who find a haven in Venezuela (with or without government sponsorship) and are active in crime.

Perez has the organization, meaning that a low turnout favors him while Capriles has the charisma.

Another candidate is Congresswoman Maria Marchado, who outrightly calls Chavez a despot and refers to government expropriation as theft.

Millions are expected to vote, although government workers could lose their jobs for supporting the opposition.

In Case You Missed It:  Macron says French citizens who want to shop, dine, travel or worship must get vaccinated for covid
Posted in Freedoms and tagged Crime, Election, Freedom, Hugo Chavez, Socialism, Venezuela.

Aussie Radio: Israel May Be Trying to Kill Own Diplomats

In an interview on the Australian Broadcasting Corporation’s “The World Today” radio program, guest pundit Geneive Abdo is asked by...