In case you didn’t know it — and you probably didn’t — there is a new FAA reauthorization bill and President Obama is expected to sign into law, this will make it much easier for the government to put scores of unmanned spy drones into American skies to spy on US citizens. 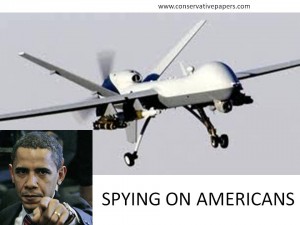 Not only that, the legislation authorizes the Federal Aviation Administration to develop regulations for the testing and licensing of commercial drones by 2015. If the law takes full effect, it is believed as many as 30,000 drones could be spying on Americans by the year 2020.

The drones, which are widely used in Afghanistan to spot and target suspected insurgents and Taliban operatives in that country as well as neighboring Pakistan, will now be used by American government agencies to have big brother keep a watchful eye on Americans.

Privacy advocates, however, are sounding the alarm good and loud.

“There are serious policy questions on the horizon about privacy and surveillance, by both government agencies and commercial entities,” Steven Aftergood, head of the Project on Government Secrecy at the Federation of American Scientists, told the Washington Times.

Jennifer Lynch, an attorney with the Electronic Frontier Foundation, a watchdog group, added that her organization is particularly “concerned about the implications for surveillance by government agencies.”

Her agency is suing the FAA to determine just how many certificates the agency has already issued to police, government agencies and a smattering of private research institutions to allow them to fly drones in U.S. airspace. The agency says it handed out 313 certificates in 2011; by year’s end, 295 were still active “but the FAA refuses to disclose which agencies have the certificates and what their purposes are,” said the Times.

“We need a list so we can ask [each agency], ‘What are your policies on drone use? How do you protect privacy? How do you ensure compliance with the Fourth Amendment?'” Lynch said.

“Currently, the only barrier to the routine use of drones for persistent surveillance are the procedural requirements imposed by the FAA for the issuance of certificates,” Amie Stepanovich, national security counsel for the Electronic Privacy Information Center, told the paper.

The use of drones to keep an eye on American citizens is just the next step in what has become the move towards a so-called “surveillance society” that is growing rampant in the U.S under Obama and his minions.

Barry Steinhardt, director of the ACLU’s Technology and Liberty Program, says while the widening use of video cameras in American society may have helped nab some criminals, they often provide a false sense of security.

In Case You Missed It:  HILARIOUS: ‘Let’s Go Brandon’ Has Been Turned Into A Hip-Hop Song That’s Now #1 On iTunes (VIDEO)
Posted in Freedoms, Tyranny and tagged Freedom, Obama.

Why Greece’s Fate Is So Important

We need to follow Greece because their default and withdrawal from the eurozone would set off major consequences to the...