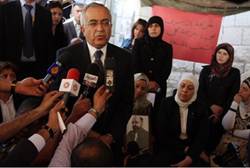 “The PA is continuously trying to allocate resources inside the city, which Israel occupied in 1967,” Fayyad said in his weekly radio address from Ramallah.

“The Israeli government is trying to impose its policies to control Jerusalem and its institutions, which is contrary to international law and signed agreements,” Fayyad said.

“This all won’t change the truth that East Jerusalem is the main part of the occupied Palestinian territories,” Fayyad said in his weekly radio address, which focused on Israeli policy in the city.

“Israel must realize that there won’t be any chance of a long lasting peace without East Jerusalem as the capital of an independent Palestinian state,” Fayyad said.

Observers note that under the 1993 Oslo Accords, to which Fayyad’s government is beholden, Israel retains both full administrative and security control of Jerusalem.

Without a final status agreement to the contrary, any attempt to exercise sovereignty in Jerusalem by the PA is a violation of the very agreement that allows the government in Ramallah to exist.

Under the British Mandate eastern Jerusalem, and Judea and Samaria, intended to become a part of the Jewish state, which legally inherited them upon Britain’s departure. However, during Israel’s 1948 War of Independence Jordan illegally occupied those areas.

Upon liberating the occupied territories from Jordan in 1967, Israel extended sovereignty over eastern Jerusalem. In 1980 the Knesset passed the Jerusalem Law formally declaring the city to be Israel’s “undivided capital.”

Meanwhile, a statement from Fayyad’s cabinet, condemned “continued Israeli violations against our people,” including an “attempted raid” on the Al-Aqsa Mosque over the weekend.

The statement referred to calls by several Likud members for Jews to arrive at the Temple Mount “in order to pray there and calling for its demolition and the building of the temple on its ruins.”

Following the liberation of the Temple Mount in 1967, Israeli authorities made the controversial and unpopular decision to hand control of Judaism’s most holy site to the Muslim Waqf. The Waqf has consistently sought to deny Jews access to the site.

The complicity of Israel’s security establishment in effectively enforcing the Waqf’s discriminatory policies on “security grounds,” has faced increasing criticism from nationalist lawmakers and Jewish activists.

On Wednesday the Zionist Organization of America called in officials in Jerusalem to end discrimination on the Temple Mount.

“The ZOA recognizes the need to maintain the highest level of security at a site as sensitive as the Temple Mount. Yet, it has been demonstrated that security threats to date have come from, rather than have been directed toward, the Muslims praying there,” the group said.

In Case You Missed It:  Senator Karen Fann Tells Reporters She Will NOT Be Releasing Audit Counts on Monday
Posted in Israel, Terrorism and tagged Freedom, Islam, Israel, Jihad, Judea and Samaria, Muslims, Palestinians, Terrorism.

(CNSNews.com) – The plight of a young Saudi journalist accused of blaspheming Islam’s prophet on the Internet is prompting growing...