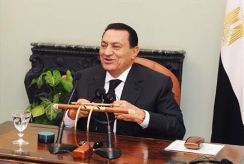 1.      Dewy-eyed predictions of democracy within the year proved to be as sillyas they appeared to be back then. Instead, a power-hungry military leadership shows it will do whatever necessary to remain in the saddle.

2.      The real action has yet to come. The Syrian regime seems destined to fall and that could have destabilizing repercussions in the Middle East’s most important country, Iran.

3.      Do not confuse Arab regimes with Arab peoples. One of my consistent themes for years has been “if you are pro-Arab, you must be anti-Arab regimes.” Events in Libya and Syria have emphatically made this point.

4.      The Realpolitik regimes in Moscow and Peking will pay a price for their backing police states, and especially the Syrian one. Likewise, the pathetic Turkish foreign policy slogan of “zero problems” turned out to mean zero problems with police states.

5.      Islamists are pursuing the age-old Middle Eastern habit of splitting just as they attain success: The Muslim Brotherhood and the Salafis find cooperation difficult in Egypt. Hamas now boasts the Haniyeh and Meshaal factions. When Islamists take over in Damascus, they will break with the Islamic Republic of Iran. Ankara and Tehran are often at odds.

6.      My favorite statement summing up the past year’s complexities: The IDF has prepared humanitarian assistance for Syrian refugees in a buffer zone between Syrian- and Israeli-controlled territory. including thousands from the ruling Alawite sect, prompting Israel’s chief of staff, Lt. Gen. Benny Gantz, to muse: “I am not sure all the Alawites will run toward Israel,” but many will do so.

In Case You Missed It:  Joe Biden Brags About Gas Prices that Are the Highest in US History
Posted in Terrorism and tagged Daniel Pipes, Egypt, Freedom, Iran, Islam, Israel, Jihad, Military, Muslims, Syria, Terrorism.