Wherever Obama with NATO intervenes, massacres, mass destruction, and unspeakable horrors and human misery follows, all thanks to Obama and his illegal war in Libya last year.

Once Africa’s most developed country, Libya today’s a ravaged, out-of-control charnel house. Tens of thousands died. Multiples more were injured, made homeless, and forcibly displaced, thanks to Obama going without congress approval to overthrow Qaddafi and help radicalize Libya. 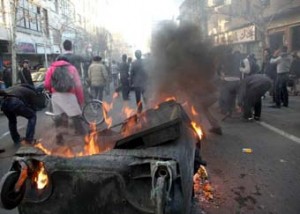 It added “serious violations of international humanitarian law (IHL), including war crimes, and gross human rights violation, which point to the commission of crimes against humanity.”

No nation may interfere in the internal affairs of another except in self-defense if attacked. Obama, through NATO claimed responsibility to protect authority as Trojan Horse deception for war. Crimes of war and against humanity followed.

They continue out-of-control. Obama through NATO is still involved although you won’t hear about it in the mainstream media as it an election year..Thousands of US forces invaded to guard key oil facilities. Occasional air attacks occur. NATO warships occupy Libya’s ports. US, Italian, French, and perhaps other forces are involved. Reports from Misrata in January said Apache helicopters slaughtered rebel insurgents trying to scale Brega oil platforms.

“Militias….continue to seize and detain people, outside any legal framework, and hold them in secret detention centers….” Thousands have no way to challenge out-of-control lawlessness or escape from brutal torture.

Medical reports confirmed their accounts. With rare exceptions, detainees aren’t tried or given access to lawyers. Several said they confessed to uncommitted crimes to end pain. Others were too scared to speak. NATO and NTC stooges know what’s going on and do nothing.

“(T)he NTC-led transitional government appears to have neither the authority nor the political will to rein in the militias. (They’re) unwilling to recognize the scale of militia abuses, at most acknowledging individual cases despite the mounting evidence of patterns of grave, widespread abuses in many parts of the country.”

As a result, ongoing torture and mistreatment continue. AI also exaggerated Gaddafi era crimes and ignored his mass public support. At the end, it was overwhelming, and today most Libyans yearn for him back.

NATO and illegitimate NTC officials spurn human rights and international law principles. Scheduled elections are cover for imperial occupation. Crimes of war and against humanity won’t be punished. As a result, they continue daily.

Exact numbers of detainees held and mistreated aren’t known. However, thousands remain imprisoned. ICRC representatives said they “visited over 8,500 detainees in about 60 places of detention.” Most were held in and around Tripoli and Misrata.

Many detainees said they were held at multiple locations. Some were secret. AI witnessed insurgents beating and threatening them, including some whose release were ordered.

One man said he was forced to lie on his back, hands and feet tied to the frame. “In this position, (he) was beaten with fists on (his) face. Then they beat me with a plastic hose on my feet.”

“Later, I had to turn around face-down and was tied to the bed. In that position, I was beaten again with a hose on my back and on the head. I was also subjected to electric shocks to various parts of my body including my left arm and chest.”

Last September, they promised “to bring any armed groups under official authorities and (to) fully investigate any incidents brought to (their) attention.”

According to AI, “(t)his pledge has not been fulfilled. As long as defense lawyers and judicial authorities have no access to thousands of (detainees, they) remain held without trial or any means to challenge the legality of their detention….”

In Case You Missed It:  “Joe Biden Is Now the Most Unpopular Person in Virtually Any Room He Enters” – Tucker Carlson on Joe Biden’s Basement Level Popularity
Posted in Tyranny and tagged Libya, NATO, Obama.

Rocket and missile fire from Gaza put the IDF on high alert on Friday evening, Channel 10 News reported. According...