TEHRAN, Iran — Iran has halted oil shipments to Britain and France, the Oil Ministry said Sunday, in an apparent pre-emptive blow against the European Union after the bloc imposed sanctions on Iran’s crucial fuel exports. 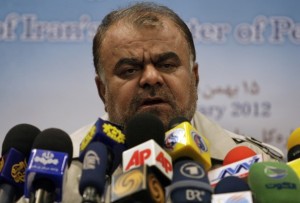 The EU imposed tough sanctions against Iran last month, which included a freeze of the country’s central bank assets and an oil embargo set to begin in July. Iran’s Oil Minister Rostam Qassemi had warned earlier this month that Tehran could cut off oil exports to “hostile” European nations. The 27-nation EU accounts for about 18 percent of Iran’s oil exports.

“Crude oil exports to British and French companies have been halted,” Oil Ministry spokesman Ali Reza Nikzad-Rahbar said on the ministry’s shana.ir Web site. “We have our own customers and have no problem to sell and export our crude oil to new customers.”

Britain’s Foreign Office declined comment, and there was no immediate response from French officials.

The semiofficial Mehr news agency said crude exports were halted Sunday to the two countries. It also said the National Iranian Oil Company has sent letters to some European refineries with an ultimatum to either sign long-term contracts of two to five years or be cut off.

Mehr did not specify which countries were sent the ultimatum, but Spain, Italy and Greece are among Europe’s biggest buyers of Iranian oil.

Iran’s targeting of Britain and France appeared to be a political decision to punish the two countries for supporting tougher sanctions against Iran over its disputed nuclear program.

Sunday’s announcement follows a flurry of contradictory signals by Iran about backlash against the EU for imposing a boycott on Iranian oil.

Last week, state media said Iran was planning to cut off oil exports to six EU nations, including France, but later reports said the nations were only told that Iran has no problem finding replacement customers for the European shipments.

The West fears Iran’s nuclear program aim to develop atomic weapons. Iran denies the allegations, and says the program is for peaceful purposes like producing electricity and medical isotopes.

Oil prices could spike this summer to unprecedented levels if Iran blocks the Strait of Hormuz were the 1/5 of the worlds oil cargo ships pass through. Iran has threatened they would block the Strait of Hormuz the immediate consequences would inflict substantial disruption on oil exports.

Chart of the Week: Nearly Half of All Americans Don’t Pay Income Taxes

This year’s Index of Dependence on Government presented startling findings about the sharp increase of Americans who rely on the...