(Jerusalem, Israel) A mob of some 50 Palestinian Muslims stoned a group of Christian tourists atop Jerusalem’s Temple Mount on Sunday morning. Three of the Israeli police officers who acted to protect the Christian group were wounded by the Muslim stone-throwers. 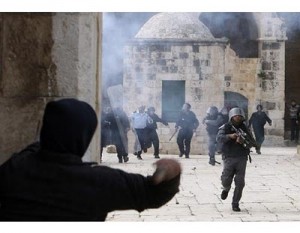 Police arrested 11 Palestinians, several of them minors, for their role in the attack.

The attack is believed to have been instigated by the former Muslim mufti of Jerusalem, Ekrama Sabri, who told fabrications over Palestinian media outlets this weekend that Jewish groups were planning to break into the mosques that occupy the holy compound and desecrate them.

Sabri urged all local Muslims to protect the mosques from “the Israeli conspiracy against the city and its holy places.”

Muslim religious figures regularly claim that Israel is plotting to destroy the Dome of the Rock and the Al Aqsa Mosque to pave the way for the rebuilding of the Jewish Temple, which the Muslims now insist never previously existed.

Because of the constant threat of Muslim violence, and despite the fact that the Temple Mount is the most holy place on earth to Jews and many Christians, the Israeli police comply with Muslim demands for harsh restrictions on non-Muslim visitors to the site. For instance, Jews and Christians are forbidden to carry Bibles atop the Temple Mount or to utter even silent prayers within its walls. Jews and Christians are regularly detained for violating these conditions.

In other violence, Palestinian terrorists operating out of the Gaza Strip fired a Grad-type missile at the southern Israel city of Beersheva on Saturday. The projectile landed in an open area just outside Beersheva and did not cause any injuries or damage. Two more short-range rockets hit nearby Israeli towns.

Palestinian forces fired at least two rockets at southern Israel – one at the coastal city of Ashkelon – on Friday, again causing no injuries or damage.

Israel’s air force responded to the unprovoked missile attacks by launching aerial strikes against terrorist installations in Gaza, including a missile production facility.

Despite the fact that the “cost of basic knowledge is cheaper than ever before,” the cost of attending college continues...