The Pennsylvania State Director of American Atheists, Inc., Mr. Ernest Perce V., was brutally assaulted by a Muslim while participating in a Halloween parade. Along with a Zombie Pope, Ernest was costumed as a Zombie Muhammad. The assault was caught on video, the Muslim man admitted to his crime and charges were filed in what should have been an open-and-shut case. That’s not what happened, though. 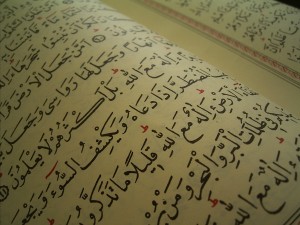 The defendant is a Muslim immigrant claims he did not know his actions were illegal, or that it was legal in this country to represent Muhammad in any form. To add insult to injury, he also testified that his 9 year old son was present, and the man said he felt he needed to show his young son that he was willing to fight for his Prophet.

The case went to trial, and as circumstances would dictate was assigned to Judge Mark Martin who is also a Muslim. What transpired next was surreal. The Muslim Judge not only ruled in favor of the attacker, but called Mr. Perce a name and told him that if he were in a Muslim country, he’d be put to death. Judge Martin’s comments included,

“Having had the benefit of having spent over 2 and a half years in predominantly Muslim countries I think I know a little bit about the faith of Islam. In fact I have a copy of the Koran here and I challenge you sir to show me where it says in the Koran that Mohammad arose and walked among the dead. I think you misinterpreted things. Before you start mocking someone else’s religion you may want to find out a little bit more about it it makes you look like a dufus and Mr. (Defendant) is correct. In many Arabic speaking countries something like this is definitely against the law there. In their society in fact it can be punishable by death and it frequently is in their society.

Judge Martin then offered a lesson in Islam, stating,

“Islam is not just a religion, it’s our culture, our culture. It’s our very essence their very being. We pray five times a day towards Mecca to be a good Muslim, before you die you have to make a pilgrimage to Mecca unless you are otherwise told you can not because you are too ill too elderly, whatever but you must make the attempt. Their greetings wa-laikum as-Salâm (is answered by voice) may god be with you. Whenever, it’s very common when speaking to each other it’s very common for them to say uh this will happen it’s it they are so immersed in it.”

Judge Martin further complicates the issue by not only abrogating the First Amendment, but completely misunderstanding it when he said,

“Then what you have done is you have completely trashed their essence, their being. They find it very very very offensive. I’m a Muslim, I find it offensive. But you have that right, but you’re way outside your boundaries or first amendment rights. This is what, and I said I spent about 7 and a half years living in other countries. when we go to other countries it’s not uncommon for people to refer to us as ugly Americans this is why we are referred to as ugly Americans, because we are so concerned about our own rights we don’t care about other people’s rights as long as we get our say but we don’t care about the other people’s say”

But wait, it gets worse. The Muslim Judge refused to allow the video as evidence, and then said,

“All that aside I’ve got here basically.. I don’t want to say he said she said but I’ve got two sides of the story that are in conflict with each other.”

“The preponderance of, excuse me, the burden of proof… “

“…he has not proven to me beyond a reasonable doubt that this defendant is guilty of harassment, therefore I am going to dismiss the charge”

The Muslim Judge neglected to address the fact that the ignorance of the law does not justify an assault and that it was the responsibility of the defendant to familiarize himself with our laws. This is to say nothing of the judge counseling the defendant that it is also not acceptable for him to teach his children that it is acceptable to use violence in the defense of religious beliefs. Instead, the judge gives Mr. Perce a lesson in Sharia law and drones on about the Muslim faith, inform everyone in the court room how strongly he embraces Islam, that the first amendment does not allow anyone ” to piss off other people and other cultures” and he was also insulted by Mr. Perce’s portrayal of Mohammed and the sign he carried.

This is a travesty. Not only did Judge Martin completely ignore video evidence, but a Police Officer who was at the scene also testified on Mr. Perce’s behalf, to which the Muslim Judge also dismissed by claiming the officer didn’t give an accurate account or doesn’t give it any weight.

Below is the video that includes the audio of the Judge during the trial,

Here’s coverage of the incident from the local ABC affiliate

Needless to say, this is totally, completely and unequivocally unacceptable. That a Muslim immigrant can assault a United States citizen in defense of his religious beliefs and walk away a free man, while the victim is chastised and insulted by a Muslim judge who then blamed the victim for the crime committed against him is a horrible abrogation.

This reeks of those cases we used to read about where a woman is blamed for her own rape because she “was asking for it” by virtue of the clothing she chose to wear, and then having the Judge set the rapist free.

I can promise you this, you have not heard the last of this issue. Not by a long shot.

Thanks to the office of Senator Jeff Sessions (R-Ala), ranking member on the Senate Budget Committee, sends along this shocking...