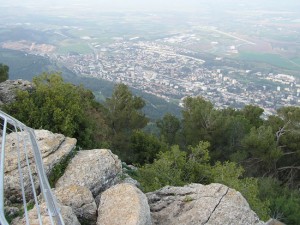 If one takes the time to read a book on Nazi propaganda which will exposed to you as never before, how thoroughly insane not only Hitler but his lieutenants and legions of Germans were; ensnared in their insane perception of what we Jews are up to.

It was a totally crazed distortion of the truth which made the Jewish image in their minds that of sinister, evil, functionally in league with the devil people who are out to get them and then the whole word.

The news out of Egypt began hinting that the demonstrations were no passing phenomenon; then they were becoming serious. They started in the last week of January 2011 last year, and there in the official PA newspaper Al-Hayat al–Jadida on 26 January, in the sports section for some reason (all of this according to PMW/Palestinian Media Watch site, thank goodness for them) an article described Israel this way: Israel is a country “whose aim is destruction and the ruin of humanity. It disseminates destruction, ruin and weapons in the world. It acts to kill nations, to threaten them and to occupy their land. It acts to disseminate the culture of hatred and racism among human beings.”

This article in the official PA mouthpiece also referred to Mt. Carmel, which was built up by the Jews after 14 centuries of no development under Muslims and Arabs. It was barely populated into the 1920s; today hundreds of thousands of Jews live on its slopes and on top of it; the University of Haifa is up there. The PA newspaper called it “the occupied Palestinian Carmel mountain.”

But pay attention less to the anti-Jew coveting of what Jews developed and claiming it is all rightfully theirs and take notice for a moment of the claim that Israel wants to “destroy and ruin humanity and disseminate a culture of hatred and racism among human beings.”

This is the “moderate,” centrist, great white hope PA talking. This material is functionally Hitlerian. For Hitler and his henchman truly believed that the Jews were out to get Germany, that they were not only Germany’s Public Enemy No. 1; they were out to exterminate all Germans and then go after the rest of mankind…

More than 2,500 Christian leaders have signed a letter opposing Obamcare’s anti-conscience mandate. The letter’s release adds to the most...