If you want to know if a war is coming, don’t listen to what the politicians are saying.  Instead, keep an eye on where ships, troops and equipment are headed.  Right now, there are quite a few signs that intense military preparations are being made for war in the Middle East.  By April, there will be multiple aircraft carrier groups in the Persian Gulf. 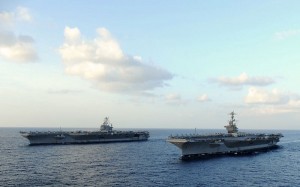 The fact that such intense military preparations are being made right now is certainly very, very interesting.  Usually wars are planned long in advance.  The truth is that military planning does not begin when the politicians stop talking.  In just about every major military conflict in modern times, forces have been moved into position long ahead of time.

Only time will tell.

But things certainly are starting to heat up.

The following are 7 signs that intense military preparations are being made for war in the Middle East….

#2 It is being reported that large numbers of U.S. troops are being positioned on two strategic islands within easy reach of Iran.  The following comes from a recent Debka article….

Debkafile’s military sources report a steady flow of many thousands of US troops for some weeks to two strategic islands within reach of Iran, Oman’s Masirah just south of the Strait of Hormuz and Socotra, between Yemen and the Horn of Africa.

#3 A major amphibious landing exercise known as “Bold Alligator” is currently being conducted along the Virginia and North Carolina coasts.  Eight other nations are also participating in this drill, and many analysts believe that this drill is in preparation for an Iranian operation.  The following comes from a recent Arutz Sheva article….

The drill includes a beach landing and air assault supported by 25 warships, and is intended to  “to revitalize, refine, and strengthen fundamental amphibious capabilities and reinforce the Navy and Marine Corps role as ‘fighters from the sea.’”

U.S. Marines have spent a decade out of their native element in the deserts of Iraq and mountains of Afghanistan, but with the Pentagon’s restructuring and forward-focus on Asia, the Marines are returning to their roots.

#4 There have been reports of huge numbers of U.S. aircraft moving into position in the Persian Gulf region.  The following comes from a recent Debka report….

Debkafile’s military sources report that flight after flight of US warplanes and transports were to be seen this week cutting eastward through the skies of Sinai on their way to Gulf destinations, presumably Saudi Arabia, at a frequency not seen in the Middle East for many years.

#5 A helicopter carrier (the USS Ponce) that was supposed to have been decommissioned after duty in Libya is now being upgraded and is scheduled to be able to be available for service in the Persian Gulf by June.

#6 The Saudis appear to be really preparing for something.  Just check out what Debka says has been going on in Saudi Arabia….

Our military sources report that the Saudis this week wound up their own intensive preparations for war. Large forces are now deployed around Saudi oil fields, pipelines and export facilities in the eastern provinces opposite the Persian Gulf, backed by anti-missile Patriot PAC-3 batteries. American,

British and French fighter-bombers have been landing at Saudi air bases to safeguard the capital, Riyadh.

#7 Someone has been moving huge numbers of tanks around by train in California.  Just check out the video below.

Do you believe that these military preparations are a sign that we will see a war in the Middle East in 2012?

President Obama’s use of drone strikes to target terrorists is depleting U.S. intelligence on al Qaeda and making America less...