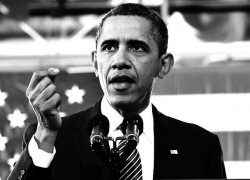 In his State of the Union address, President Obama declared that “America is back.” Examining Obama’s foreign policy efforts, however, this statement seems doubtful. To better understand Obama’s foreign policy, Heritage hosted a panel discussion with Kim Holmes, Mark Thiessen, and Clifford May.

As Holmes has previously written, Obama defines America as just another nation with no particular claim to greatness or exceptional responsibilities. As such, his foreign policy downplays the U.S. leadership role, defers to international organizations, and focuses on soft power strategies. Paying particular attention to the Arab Spring, counterterrorism, and the defense budget, the panel discussed how the Obama doctrine has created inconsistent policies and ignored long-term concerns.

In avoiding a leadership role, U.S. actions in the Middle East have become erratic. In Iran, America first tried conciliatory efforts; now, it is taking a harsher tone. In response to the Arab Spring, the U.S. has done nothing in Syria, sent troops into Libya, and made speeches about Egypt. There is no clear humanitarian, economic, or strategic rationale governing American actions. Instead, the Obama doctrine waits on the U.N. before making a stand for freedom and democracy.

Obama’s biggest success—the Osama bin Laden mission—was based on intelligence gathered under the Bush Administration. But Obama is failing to gather new intelligence that could be vital to the safety of American citizens in the future. He has chosen to kill terrorists rather than capture and interrogate them, because his policies do not include a long term counterterrorism strategy. Indeed, the U.S. often lets captured terrorist go because there is nowhere to hold them. By failing to build up intelligence information and pursuing a terrorist “catch and release” policy, the Administration is leaving the U.S. and its allies vulnerable to attack.

Finally, the new defense budget clearly demonstrates a lack of commitment to America’s long-term strength. Under the Obama doctrine’s assumption that international organizations and soft power strategies will fill the security gap, the Administration is attempting to reduce the overall capacity of the U.S. military. The problem, of course, is that hostile powers such as China, Iran, and Russia are all too willing, and increasingly capable, to fill the gap themselves.

After three years of the Obama doctrine, it is clear that America is not, in fact, “back.” Instead, America’s ability to champion freedom and promote stability has been continually damaged, creating a more dangerous world for all.

Caitlin Kincaid is currently a member of the Young Leaders Program at The Heritage Foundation. For more information on interning at Heritage, please visit: http://www.heritage.org/about/departments/ylp.cfm

The cost of gasoline today is at its highest point ever during winter, an ominous sign of what might be...