Ethiopian and Somali troops took a strategic base of the Islamist al-Shabab terror militia in south-western Somalia on Thursday. 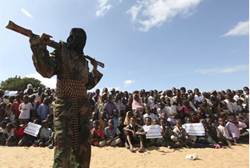 About 50 vehicles, including some 20 tanks, entered Baidoa before troops spread out to secure the environs surrounding the town.

After the southern port of Kismayo, the town was the most important al-Shabab base.

Al-Shabab, which recently joined al-Qaeda, confirmed that it had withdrawn its forces from Baidoa as part of a “tactical retreat.” It has also vowed to ensure there is bloodshed in the town.

“The takeover does not mean that the enemy will enjoy the city, there will be more bloodshed,” al-Shabab commander Sheikh Mohamed Ibrahim told the AFP.

A Somali government military commander in the town said his forces had been warmly received.

“We have taken control of Baidoa without a single shot, it is a great day for the people who are now welcoming us warmly,” Muhidin Ali said, according to AFP.

It was reported by the BBC that the terrorists fled the town or took off their uniforms and blended with the residents before troops arrived.

However, analysts say the main challenge for the peace-keepers will likely be preventing bombings or other terror attacks, rather than holding the town.

Even so, the inability of al-Shabab to defend Baidoa – a major al-Shabab stronghold that is home to key leader Abu Mansoor and other senior figures – is regarded as significant.

Not only is Baidoa a souce of many al-Shabab fighters, but also controls the main road linking Mogadishu to the south-west, as well as parts of Ethiopia and Kenya.

Baidoa also has an airstrip the terror group is widely believed to have used to import munitions for their terror militias.

The seizure of Baidoa came just one day after the UN Security Council voted to increase the African Union force in Somalia from 12,000 to 17,731.

The resolution passed by the 15-nation council also gave the African force a stronger mandate to attack al-Shabab militants and substantially increase international funding for the military operation.

These developments come ahead of a major conference to be hosted by the UK on Thursday aimed at ending two decades of conflict in the troubled country.

Meanwhile, senior officials from nations supporting the interim Somali government met in London on Thursday to discuss the country’s future.

The writer, an Italian journalist with Il Foglio, writes a weekly column for Arutz Sheva. He is the author of...