Abe Foxman, the National Director of the Anti-Defamation League (ADL), wrote a letter to the President of Harvard University, Dr. Drew Gilpin Faust last week, condemning the “One State Conference” scheduled to take place at Harvard University’s Kennedy School of Government on March 3-4. 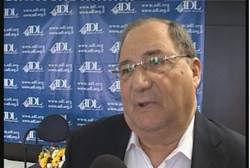 The conference, organized entirely by student groups that advocate an ideology based on the elimination of the Jewish character of the State of Israel, is scheduled to feature speakers including the Executive Director of the Electronic Intifada, avid supporters of the Boycott, Divestment and Sanctions (BDS) movement and others who compare Israel’s treatment of the Palestinians to the Nazi’s treatment of the Jews.

“The Anti-Defamation League (ADL) is one of the nation’s premier civil rights organizations,” Foxman asserts. “We work tirelessly to fight anti-Semitism, racism and all forms of bigotry and we are staunch champions of the fundamental right of free expression and the significance of that right in academia. We also recognize that offensive speech is protected, and that the appropriate response is not censorship but strong unequivocal denunciation,”

While the university did issue a statement of “non-endorsement,” he notes, it is a “barely noticeable disclaimer on the acknowledgement page of the conference website.” Furthermore, the logos of the Harvard Kennedy School Carr Center for Human Rights and the Weatherhead Center for International Affairs of Harvard University “continue to appear prominently in full color on the web site.”

He continues to state, “This conference is so fundamentally flawed that ‘balance’ cannot cure it. This conference goes beyond academic discourse about the conflict by promoting the elimination of the Jewish state.”

“Although the conference organizers state that one of their goals for the conference is to ‘help to expand the range of academic debate on this issue,’ there can never be any legitimate discussion of a concept which, by its very nature, will result in the end of the Jewish character of Israel,” Foxman argues.

The letter then calls on the President of Harvard to “forcefully denounce this conference so there is no question that Harvard and its institutions are adamantly opposed to the offensive notion of a ‘one state solution.’”

In addition, students, alumni and friends of Harvard University initiated a petition stating that they are “appalled” at Harvard’s decision to “host and finance the conference.”

The conference, the petition states, “which considers the dissolution of the present State of Israel, is not an academic endeavor, but a manifestation of the face of the ‘new anti-Semitism.’”

“[T]his conference is advocating the demographic destruction of the Jewish State and thereby denying the right of the Jewish people to exercise their own sovereignty. The conference essentially calls for the dismantling of the existing State of Israel. By funding and hosting this conference, Harvard University is lending its name and providing a supportive forum to one of the most ancient racial forms of hatred.”

The petition can be signed here.

In Case You Missed It:  California School Official Says Thousands of Students and Children Are Trapped in Afghanistan – Their Stories Will Start to Unfold in Coming Days
Posted in Israel, Terrorism and tagged Freedom, Islam, Israel, Jihad, Liberalism, Palestinians, Racism, Terrorism.

Prime Minister Binyamin Netanyahu had fiery words for Palestinian Authority Chairman Mahmoud Abbas Sunday evening after a day in which...