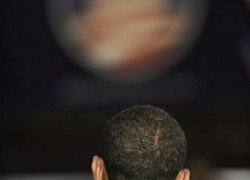 Talking about his health care law, President Obama has said, “If you misrepresent what’s in this plan, we will call you out.” In keeping with that spirit, below is a list of Obamacare’s top five biggest broken promises:

Reality: Research continues to show that as many as 30 percent of employers will dump their employees out of their existing health care coverage. And, as Heritage analysts have noted, new coverage mandates are forcing plans to change, even for those who have moral objections.

2.) “I will not sign a plan that adds one dime to our deficits—either now or in the future.”

Reality: As Heritage analysts explain, “A close examination of what CBO said, as well as other evidence, makes it clear that the deficit reduction associated with PPACA is based on budget gimmicks, sleights of hand, accounting tricks, and completely implausible assumptions. A more honest accounting reveals the new law as a trillion-dollar budget buster.”

Reality: A Heritage Fact Sheet shows the various ways Obamacare ends Medicare as we know it, including severe reimbursement cuts that threaten seniors’ access to care.

4.) “I will sign a universal health care bill into law by the end of my first term as president that will cover every American and cut the cost of a typical family’s premium by up to $2,500 a year.”

Reality: Heritage research outlines 12 ways that Obamacare will increase premiums instead of reducing health care costs. Requirements that plans allow young adults to stay on their parents’ coverage and offer preventive services with no cost sharing are already leading to higher-than-usual growth in premiums.

Reality: Obamacare includes tons of new taxes and tax hikes. Heritage has a list of them that shows an increase in revenue of more than $500 billion in 10 years. Two examples that clearly hit consumers are the 10 percent excise tax on indoor tanning services that will raise $2.7 billion between 2010 and 2019 and, beginning in 2013, the 2.3 percent excise tax on manufacturers and importers of certain medical devices that will raise $20 billion between 2010 and 2019.

Responding to record-high gas prices and a potential for further disruptions in supply, Sen. Chuck Schumer (D-NY) on Monday requested...