Russian President Dmitry Medvedev recently honored a Syrian writer who praised the 9/11 attacks and once wrote about “hated Jew Shylock.” 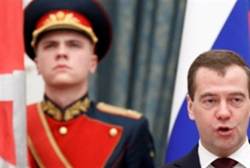 Ursan has praised the Al Qaeda-planned aerial attacks on the United States on September 11. Two weeks afterwards, he wrote in a Damascus literary magazine, “My lungs filled with air, and I breathed in relief as I had never breathed before.

A year and half later, he wrote, “The covetous, racist and hated Jew Shylock who cut the flesh from Antonio’s chest with the knife of hatred, invades you with his money, his modern airplanes, his missiles and his nuclear bombs.”

Medvedev said that Ursan and 10 other awardees “have made a special and very valuable contribution to developing humanitarian relations and bring closer together everyone with an interest in Russia, its language, history and modern life.”

ADL director Abraham A. Foxman stated after the award ceremony in Moscow, “Regardless of his literary contributions, the honoring of a man who cherishes murder and promotes bigotry cannot be justified.

“Ursan’s expression of anti-Semitic sentiments and praise of the 9/11 terror attacks must be unconditionally and unequivocally rejected.”

Foxman wrote Medvedev to ask him to take back the award from Ursan, according to the European Jewish Press (EJP).

Baruch Gorin, a spokesman for the Federation of Jewish Communities in Russia, stated “We hope that it is not more than a stupid mistake.”

The Simon Wiesenthal Center  said it was “shocked” at the award and added, “Ursan is an extreme opponent of peace, normalization or even contact between Syria and Israel or Israelis, having successfully contributed to sabotaging the 1999 peace talks between two countries. He is a conspiracy theorist and apologist for terrorism.”

Talking about his health care law, President Obama has said, “If you misrepresent what’s in this plan, we will call...