A Washington-based institution is warning that an Iranian research center has more to do with the Islamic Republic’s nuclear program than was previously believed. 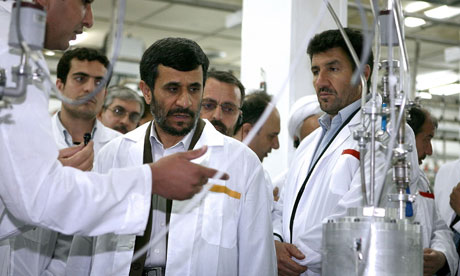 The Associated Press reported that the Institute for Science and International Security (ISIS) said Wednesday it had new indications of hidden weapons work by Iran.

According to the report, a cache of telexes to Western high-tech companies from the Physics Research Center in Tehran shows that from about 1990 to 1993, the center sought to purchase equipment and materials that could have been used in weapons research and development.

The report noted that Tehran has acknowledged that the Physics Research Center in Tehran conducted nuclear-related research, but said the center’s work was limited to efforts to prepare Iran’s military and civilian population for dealing with a nuclear strike. Now, it seems that the center was covertly being used to enhance Iran’s nuclear weapons program.

In his first statement on the International Atomic Energy Agency’s latest report, which said that Iran has expanded it nuclear program, and that the IAEA was concerned over the program’s “possible military dimensions,” Prime Minister Binyamin Netanyahu said Saturday night that the report “constitutes additional proof that the State of Israel’s assessments are correct. Iran is continuing with its nuclear program without let-up; it is enriching uranium to a high level of 20% while grossly ignoring the demands of the international community.”

According to the report, Iran in recent months has sharply increased the rate of uranium enrichment. The report said that Iran was continuing its enrichment program “without hesitation,” and was enriching uranium to levels of 20%, disregarding the demands of the international community.

Iran has insisted that its nuclear development activities are aimed at peaceful domestic purposes only — but it has refused to modify or stop them, and has maintained secrecy about its programs at the highest levels.

On Wednesday, the UN’s International Atomic Energy Agency (IAEA) admitted that “intensive efforts” by its team that visited Iran have failed.

The IAEA team members were denied access to a key military site during their visit to Tehran, reports said, and were unable “to reach an agreement on a document facilitating the clarification of unresolved issues in connection with Iran’s nuclear program.”

The tension over the controversial nuclear program continues, meanwhile, as Russia warned Israel not to attack Iran over its nuclear program, saying on Wednesday that military action would have catastrophic consequences.

Russia’s warning comes after British Foreign Minister William Hague said earlier this week: “I don’t think a wise thing at this moment is for Israel to launch a military attack on Iran. I think Israel like everyone else in the world should be giving a real chance to the approach we have adopted on very serious economic sanctions and economic pressure and the readiness to negotiate with Iran. That’s what we need to make a success of.”

The United States also is pressuring Israel not to use force. US Chairman of Joint Chiefs of Staff General Martin Dempsey said that the US believes that “the Iranian regime is a rational actor and it’s for that reason, I think, that we think the current path on Iran is the most prudent path at this point.”

Abe Foxman, the National Director of the Anti-Defamation League (ADL), wrote a letter to the President of Harvard University, Dr....